Wembley Central By-election 2011: Labour Hold No Cause for Celebration 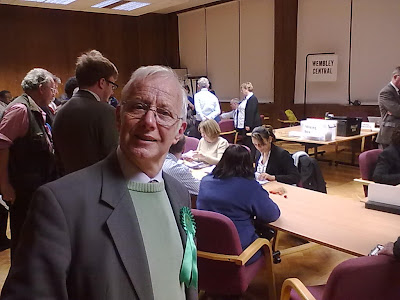 The results for the Wembley Central by-election held on 22 December 2011 are as follows:

Source: Brent Council with vote share percentages calculated by me. 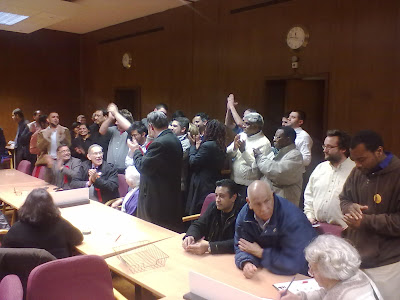 The group picture shows the Labour team in jubilant spirit at the delcaration. Libdems looked particularly dejected (identifiable in foreground for that reason alone) and had clearly cottoned onto the fact, fairly early in the count, that it wasn't going to be as close as they expected. In the event the margin was quite large.

I had spent some hours on polling day on a walkabout with the Green candidate, Martin Francis. We canvassed two streets until all the leaflets were gone, visited polling stations, shared friendly discourse with tellers from opposition parties, and solicited latest polling figures. By late afternoon we were predicting a very low turnout. In the event, turnout must have picked up in the evening rush hour better than we expected. After taking postal votes into account, I estimate that each of the four polling station venues (serving 7 polling districts between them) must have seen on average around one voter per minute pass through their entrances in the last six hours of polling. I should imagine that Labour's knocking up operation was particularly good - and we passed Cllr James Powney twice during the day.

Although Councillor Sheth and Brent Labour are to be congratulated on their win - only as a matter of electioneering - local and vocal opponents of the cuts agenda will be left wondering how they managed it - more important, politically - or what it would have taken for Labour to have lost this byelection, given how much discontent has already been caused by the local library closures, with the threat of yet more pain to come; in particular, when housing benefit caps come into force in the new year with little prospect of a fight by the Labour administration. The result is little cause for celebration but rather greater cause for trepidation that Labour might feel emboldened in its current course.

The LibDems will also be left worried about their prospects in Brent, given that they had already taken this ward at the byelection in 2009 and weren't short of leaflets this time round either.

The Greens have much to proud of in their campaign. Our aim was modest, in a part of Brent where we have not been active in the past, and we managed to increase our vote share on both the 2009 byelection (3.5%) and the 2010 local elections. We canvassed only a part of the ward, with a small team, and could see the fruit of this labour when one of the ballot boxes in particular was sorted. Martin Francis served us proud!

A word about Brent's statistical analysis. The following shows percentages rounded to the nearest integer. However, such rounding is neither de rigeur nor, in my opinion, advisable. Figures should be expressed to at least one decimal place (Brent is already calculating the turnout to 2 decimals so why the discrepancy?). Firstly, one could then distinguish between candidates getting 0.3% and 0.7%, for example, and one would hardly want to round 0.3% downwards. Secondly, totals would then come to 100%, even after taking any spoilt papers into account. Therefore, I have expressed percentages at the top of this post to one decimal place. The Greens vote share went up 1.0% in this election from 2009.

Let me take the opportunity, on behalf of Brent Greens, to thank our voters at this byelection. We will be back for your vote in the May 2012 GLA elections, and then some!

First thoughts on result on Wembley Matters by the candidate Martin Francis.