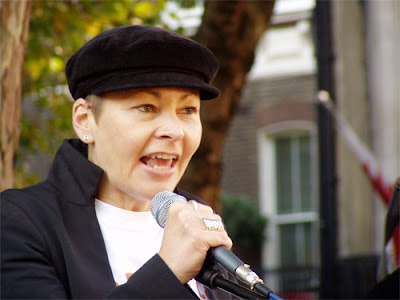 The UK's Green MP Caroline Lucas will speak out in support of the "real politics" of protest at the 'We are the 99%' rally taking place outside St Paul's Cathedral on Saturday 5 November.

The MP for Brighton Pavilion, who pressed David Cameron to support a 'Robin Hood Tax' on financial trading during Prime Minister's Questions earlier this week, will join with protesters to show support for the Occupy movement against economic injustice.

Saturday's rally, taking place from 2pm, will be followed by a march on Parliament from St Paul's.

Caroline Lucas, one of the few MPs to have visited the Occupy LSX encampment, said:

"As the public becomes more aware of the injustice and unsustainability of our economic system, more and more people are taking to the streets for a different kind of society - one which puts the interests of the many before those of a powerful minority. That the leaders of the mainstream political parties have completely failed to engage with what is happening down at St Paul's and at protests across the country shows just how painfully out of touch they are with the public mood for change."

Dr Lucas MP said: "This is real politics in action - and the voices of those ordinary and extraordinary people who want a fairer, greener system to replace the stocks-and-shares house of sand that sustains corporate capitalism must now be heard."

Dr Lucas said: "The global financial crisis and billion-pound bailouts have exposed the plain truth that the entire economic system is rigged against the hard working majority. As a first step towards mending the damage wreaked on our society by reckless financial gambling, the Government must back a Robin Hood Tax at the G20 Summit in Cannes - with the revenue ear-marked to address sustainable development and the growing climate crisis."

Dr Ali said: "The Occupy movement represents the need for a grassroots, sustainable solution to fix the system, not just by tinkering around the edges. We need to find an economic system which costs things according to the planet and to value people's labour according to what they actually put in. We must support those doing an honest day's work, instead of the unaccountable bankers and financial service industry."