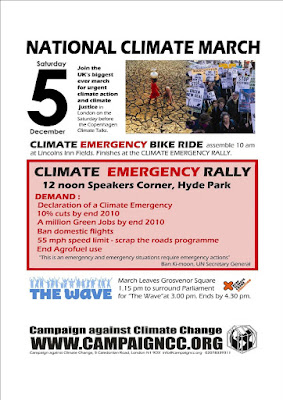 Posted by Martin Francis at 14:04 No comments: 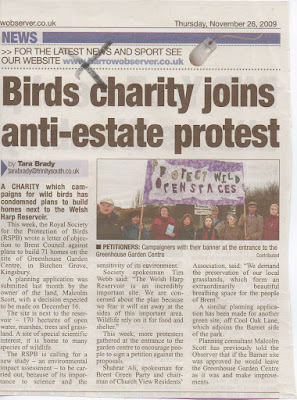 Posted by Martin Francis at 18:21 No comments: 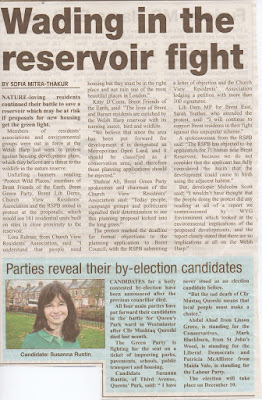 Posted by Martin Francis at 18:18 No comments:

Posted by Martin Francis at 18:15 No comments:

People of Brent to Protect Wildlife of Welsh Harp 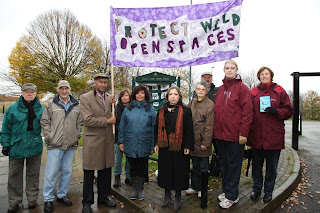 On Friday 20 November, Brent Green Party and Brent Friends of the Earth joined forces with local residents and Brent MP Sarah Teather to unveil a banner to "PROTECT WILD OPEN SPACES" and voice their outright opposition to the threat to wildlife from a proposed housing development on the Greenhouse garden centre at Welsh Harp.

Brent Greens and Brent Friends of the Earth have contacted many local residents and groupings united in their opposition to the plans to build 71 flats on the Brent side and another 90 flats on the Barnet side of the Greenhouse site. Local residents have submitted petitions to the Council on Friday 20 Nov, the deadline for receipt of planning objections to Brent Council.

Lora Rubner, spokesperson for Church View Residents' Association said: "I understand that people need housing but they must be in the right place not to ruin one of the most beautiful places in London. Local residents have been countersigning our petition in great numbers."

Shahrar Ali, Brent Green Party spokesperson for Environment and Planning and Chair of the Church View Residents' Association in Welsh Harp said: "Local people, campaign groups and politicians have signalled their determination to see this planning proposal kicked into the long grass. Instead we demand the preservation of our local grasslands which form an extraordinarily beautiful breathing space for the people of Brent. The local residents association has already lodged a petition with hundreds of residents opposed to the plans."

Kitty D'Costa of Brent Friends of the Earth, said: “The lives of Brent and Barnet residents are enriched by the Welsh Harp resevoir with its teeming insect, bird and wildllife. The Welsh Harp has been given many designations in order to protect the many species that live there. We oppose proposals to build 70 housing units on the Brent side of Welsh Harp and 91 housing units on the Barnet side. We believe that since the area that has been put forward for development is designated as Metropolitan Open Land, it should be classified as a conservation area, and therefore these planning applications should be rejected.”

Martin Francis, spokesperson for Brent School Without Walls said: "As an educator and environmentalist I am passionately committed to ensuring that children in the local area have access to the natural world. This involves direct experience via all the senses and has scientific, aesthetic and spiritual dimensions. The Welsh Harp offers such an experience and must be protected at all costs."

NOTES.
1. Photo by Jonathan Goldberg: Front left to right Shahrar Ali of Brent Greens, Kitty D'Costa of Brent Friends of the Earth and Sarah Teather MP forming a united front with members of the Church View Residents Association, Welsh Harp Conservationists and local RSPB at the entrance to the Welsh Harp nature reserve.

3. Brent Greens have solicited an objection from the RSPB, who have given us permission to make it publicly available here.

Following the BNP's posting of a racist video filmed in Wembley High Road and Ealing Road, we have sent the following letter to to the local press. Postings on the issue are availableon the Wembley Matters blog.

LETTER TO LOCAL PRESS
"We write to express our disgust at the latest tactics of the BNP, to target the diverse community of Wembley in a campaign video aimed at fomenting racism and fuelling discontent. The BNP is using football as an emblem for racism when the Football Association and the football supporters' organisations are amongst the most stalwart opponents of racism in British society.

The video sought to depict the local multi-ethnic population as alien and foreign and their presence in Wembley as somehow sinister. Instead we say that the people shown represent the lively and diverse population of modern Wembley who live, work, learn, shop, eat, relax and debate together. They include bus drivers, builders, nurses, doctors, chefs, councillors, teachers, shopkeepers, school governors and others; all from many different backgrounds, who contribute to our community and participate in efforts to improve it.

The school children shown do argue vociferously about differences, but not about race or religion as the BNP might hope, but like children around the country do, usually about their allegiance to Arsenal, Chelsea, Manchester United or Liverpool; or about who should win the X Factor! Anyone who knows our community will realise that the BNP's efforts to divide us will not succeed and will be treated with the contempt they deserve.

As Green Party general election candidates covering Wembley and the wider environs, we will take every opportunity to confront and expose racial hatred and bigotry in politics and society." 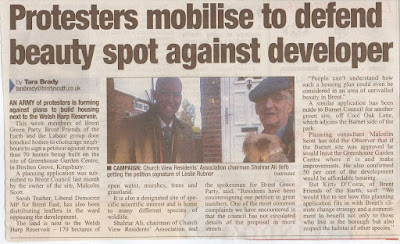 Posted by Martin Francis at 15:31 No comments:

Posted by Martin Francis at 15:27 No comments: 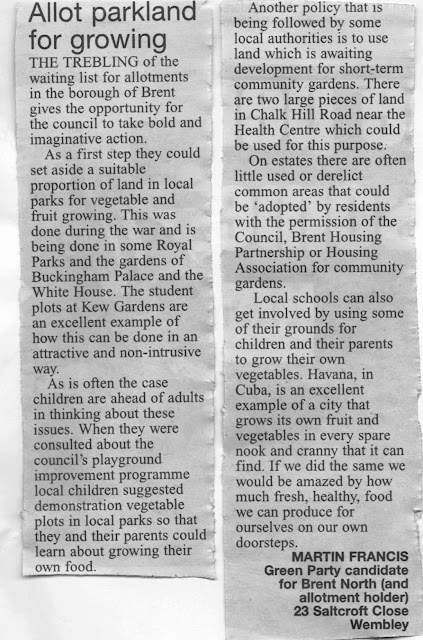 Posted by Martin Francis at 15:24 No comments:

Bea Campbell to contest Hampstead and Kilburn for Greens 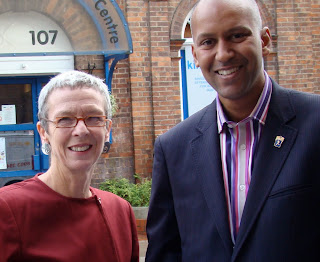 Brent Green Party has today proudly announced that Beatrix Campbell has been selected to contest the Hampstead and Kilburn constitutency in the upcoming general election.

Launching her campaign alongside Shahrar Ali outside the West Hampstead Women's Centre, the well-known writer and broadcaster said: "This venue was chosen to highlight one of the chief differences between the Green Party and the other major parties: we put at the absolute centre of our policies the sustainability of social relationships and the need for a fundamentally fair society."

"We stand for social justice, respect and equality between the genders and the generations. And we don't think that slicing public services to ribbons can be the way forward for British society."

"I've spent my life campaigning for the disadvantaged women and men, who need services and support in their lives, as do we all at some time or another. Taking that away will cause irreparable damage to our society."

Beatrix said that voters were increasingly recognising that investing in sustainable economies demands radical reform of the way we do housing, transport, urban planning, farming and shopping.

"This electorate, Hampstead and Kilburn, I know contains many voters who recognise this fact. The electoral system must change to adequately reflect the spectrum of opinion in British society."

"Until it does, voters can express their concerns about the "grey" parties who have dominated British politics in recent years by supporting candidates, such as I, who offer hope that politics could be different - better and braver about climate change, the conflict zones ravaging the world and the inequalities and injustices makes millions of lives a misery."

Shahrar Ali, Green Parliamentary candidate for Brent Central, said: "I am absolutely delighted to see Bea standing, as my neighbour, in the new Hampstead and Kilburn constituency, which includes parts of Brent where we have campaigned hard and polled consistently well over the past few years."