The citizens of Cricklewood are being confronted with a frightful sight, as they stand in large grey meltwater slushpuppies at the northbound bus stop on the Broadway.

The Conservative Party has seen fit to erect two vast, adjacent and almost identical billboards both depicting huge images of David Cameron’s head and shoulders, captioned with some implausible slogan about ‘cutting the deficit not the NHS’.

The two giant Camerons are only almost identical, since in each he is a different colour. On the left, (if you were facing east), he has a very pale green skin tone, like fish flesh just going off. However the right hand Cameron is a shiny orangish hue, like a Kilroy-Silk suntan.

Could this diversity in skin tone be deliberate?, After all Cricklewood is possibly one of the most ethnically heterogeneous places on the planet, whilst waiting at the bus and staring at the strange Camerons, you are likely to hear people speaking English, Polish, Tamil, Brazilian Portuguese, Somali and Lingala at least. However I doubt if many know or care who the terrible twins on the billboard are.

Perhaps there is a subliminal political message, e.g.: ‘I’m slightly concerned about the environment sometimes, but also a bit liberal and democratic’.

As I stand staring incredulously at the dual apparitions, waiting for a bus, I find it warming to think that the Tories have wasted money putting up these silly posters, but chilling to think how much more such rubbish they will be able to afford before the general election.
Posted by DON'T dis US at 15:29 1 comment:

Posted by Martin Francis at 13:46 No comments:

Welsh Harp Decision a Victory for the People of Brent 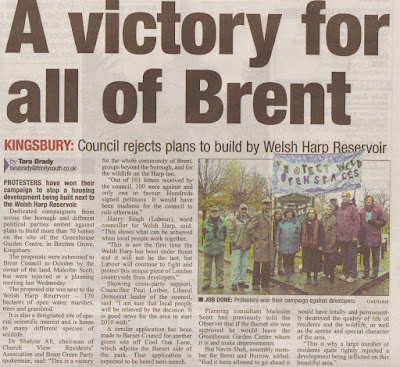