Frack Free Ryedale has launched a people's declaration against fracking

Sue Gough from Frack Free Ryedale has launched a people's declaration against fracking in response to yesterday's decision to frack at Kirby Misperton in Yorkshire, vowing to continue the fight and asking for support from across the country.

https://www.foe.co.uk/act/add-your-name-peoples-declaration-say-no-fracking-0
Posted by DON'T dis US at 21:09 No comments: Links to this post

Hello Friends. Would you like to join us? This will be a shared sponsored walk to enjoy ourselves, exchange ideas and to collect some change from our sponsors to help fund our groups. It is open to any voluntary organisations in Brent working for Environmental and/or Social Justice. You don’t have to fund-raise if you don’t want to.

It is about 6 miles long with points along the way where people can join or leave.  We will start from  Stonebridge Park Station and walk the Brent River Park path (kingfishers have been seen here)  to Wembley Stadium area (Wembley Park Station) then follow Barnhill Road taking in the new Chalkhill Park, St David’s Open Space (orchard, BMX track, canal feeder – muntjac deer have been seen here). Birchen Grove (coffee/tea available at Garden Centre café if we are early enough), Welsh Harp to Silver Jubilee Park, cross into Fryent Country Park for a picnic on Gotsfords Hill then through the recently added Masons Field to Kingsbury Station.

We would be glad if your group would like to join us. If you would, then please contact the organisers, Martin Francis and Pam Laurance.

Martin is an experienced “Guided Nature Walker”. He runs the Brent Schools without Walls Scheme. http://www.brentschoolwithoutwalls.btck.co.uk/
Pam is one of the joint coordinators of the Brent Friends of the Earth Group
http://www.brentfoe.com/

Martin will do a risk assessment of the route and both of us have insurance for our own groups but please note that each group is responsible for the health and safety of people coming from your group and for your own fundraising. (We have some fundraising forms we can email to you if you would like them.) I am attaching a map of the route.

If it rains on the day please phone to find out if we are carrying on or postponing. 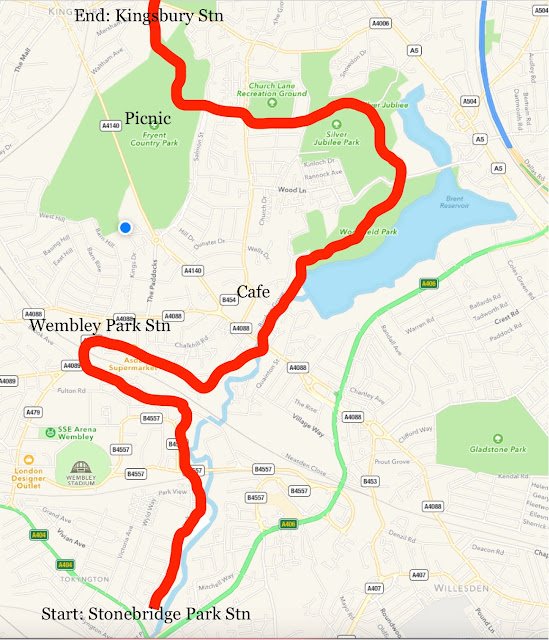 How Brent Greens fared in the GLA and Kilburn elections 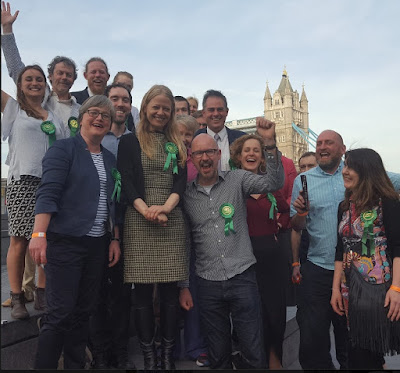 There are full details of the Brent and Harrow results on www.wembleymatters.blogspot.co.uk.  In summary  we came third in the London Mayoral campaign and Sian Berry achieved the highest number of second preference votes. In the Brent and Harrow constituency contest Jafar Hassan and the Lib Dem candidate jostled for third place with an eventual narrow margin for the Lib Dems. On the London list we won two AM seats for Sian Berry and Caroline Russell with Shahrar Ali just missing out on a third Green seat.

In the Kilburn by-election there was again a narrow margin between Lib Dems and Greens with Pete Murry achieving a 9% vote which is one of our better by-election votes. There was a 7 vote margin between Greens and Lib Dems in the Lib Dem's favour but there was a discrepancy of 14 votes between the total votes cast and each candidate's vote totalled.  A long and arduous recount may have made a difference but it not justifiable for a third place.

This is what the Green Party had to say yesterday:

The Green Party has recorded its best ever election results in London where Sian Berry, the Green Party’s London Mayoral candidate, came third and the Party retained its two London Assembly seats.

On the Assembly, councillors Sian Berry and Caroline Russell replace Baroness Jenny Jones and Darren Johnson, who have both stepped down after 16 years of outstanding service.
The Scottish Greens enjoyed a superb night, growing their representation from two MSPs to six. In winning election, 21-year-old rising star Ross Greer became the youngest-ever MSP .
Reacting to the outstanding results in the capital, Natalie Bennett, Green Party Leader, said:

The Greens standout results in London demonstrate how a positive campaign with good ideas for London can resonate widely with voters. We thank all our candidates, activists and supporters for delivering our biggest and best campaign in London to date.

Today is a victory for the politics of bringing Londoners together not dividing them. I’m proud that Londoners have voted for good, positive ideas in such numbers. In every vote Greens have cemented our position as the number three party in London, coming third in the vote for mayor, on the Londonwide list and in a majority of constituencies. The immediate priority for Greens on the London Assembly now will be to push the new mayor to make the right decisions on road-building and estate demolitions and to clean up our city’s filthy air.

In the local elections, the Green Party saw strong results in the West Midlands and the South West. In Stroud, where Natalie visited on the eve of the poll, the Party retained five councillors and added three gains. The party retained all its councillors in Solihull and made two gains. The party now have 27 Green Party councillors on 11 councils in its growing West Midlands powerbase (including making a breakthrough in Cannock Chase and winning a hard-fought seat in Worcester that led to the Tories losing control of the council). The party also won a first-ever seat on Weymouth and Portland council.
Reacting to the local election results, Natalie said:

I also want to thank all of the candidates, members and supporters who helped us to stand in the largest-ever number of council seats, 54% in these elections compared to 25% in 2012.

That reflects the growth and development of the Green Party since then, with membership five times larger, and we’re looking forward to the county elections next year to further increase our representation.

The new Green councillors will join a team who are dedicated to standing up for the most disadvantaged, to taking real steps to alleviate the ever-worsening housing crisis, and to helping communities live within the environmental limits of our one fragile planet.

The breakthroughs we have made mean more councils will now have Green voices, voices that scrutinise, challenge, and ask tough questions. Sadly, we have lost some long-term, dedicated, valued councillors in Norwich, Oxford and other places. I thank them for their years of service to their communities and the Green Party and am sure that the parties there will be bouncing back in coming years, with strong representation still on both councils.

The final Green tally of English council seats will not be known until Sunday when the Bristol City council count is completed. Bristol is the Greens’ stronghold in the South-West and the party is poised to increase it representation from 14 councillors.
The Scottish Greens increased the presence in Parliament threefold and achieved almost a 14% increase on their best-ever total in the regional vote across Scotland.
Turning her attention to Scotland, Natalie said:

This was a great night for the Scottish Green Party and they are taking a great team into Holyrood. As well as the much respected Alison Johnstone and Patrick Harvie, Ross Greer will be the youngest MSP and land reform campaigner Andy Wightman will be a formidable force.

Posted by Martin Francis at 11:36 No comments: Links to this post

Posted by Martin Francis at 08:01 No comments: Links to this post

How to vote Green on Thursday 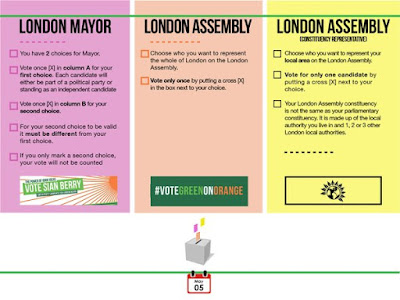 Posted by Martin Francis at 18:45 No comments: Links to this post 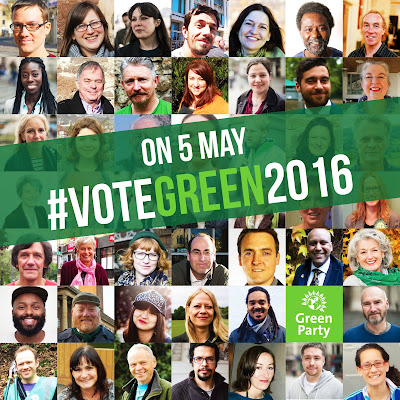 It's less than a week until the 5th May elections, and over 1500 Green candidates across the UK are campaigning to be elected to councils, assemblies and as mayors. Greens make a real difference in local communities - they fight for clean air, for decent homes and for a society that works for the common good, not just the privileged few.

Locally we have Jafar Hassan standing for the Brent and Harrow constituency and Shahrar Ali is Number 3 on the Green Party List - vote Green on the orange ballot paper.

Sian Berry's campaign for Mayor is rapidly gaining support. While we were leafleting in Queen's Park yesterday a Brent Labour councillor commented on her positive presentation of Green policies. Give her your first preference vote for Mayor.

Posted by Martin Francis at 10:19 No comments: Links to this post