Our NHS is on its knees, thanks to ideological attacks and cuts from this Tory Government. In the 70th year of our health service, let's take to the streets to defend it.

The People's Assembly have organised this demonstration, and the Green Party is proud to support it. Join our bloc outside Waterstones, 82 Gower St, Bloomsbury, London, WC1E 6EQ from 11.30am.

Our co-leader Jonathan Bartley will be speaking at the rally at the end of the march, so make sure you stick around. More details on the demonstration can be found here: http://www.thepeoplesassembly.org.uk/nhs_fix_it

This NHS winter crisis isn't the fault of the immigrants, the disabled, the elderly or the nurses. It's the fault of our Government. This Saturday, join us to defend our NHS. 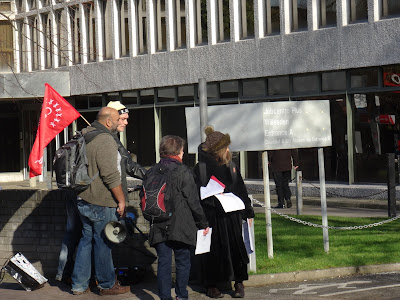 Kilburn Unemployed Workers Group protested outside Neasden Jobcentre 0n Tuesday 30th January 2018, leafleting the public and playing music, by ‘The Fall’ to mourn the fact that, the jobcentre was about to go the same way as Mark E.Smith, or nearly the same way, as he wasn’t sold off for development.

Below are proposed closure dates of Neasden & Kilburn as per The Mirror newspaper.

KUWG write: "KUWG have petitioned the DWP with signatures by claimants, and got support from local Labour MPs Tulip Siddiq, and Karen Buck, with Labour and Green Party Councillors, opposing the wretched closures. Poor, Sick, and confused people will find themselves out-of-pocket, and most likely missing appointments or being late and getting sanctioned. There have been nationwide closures and protests but this Rotten Conservative Government have been as stubborn as asses, to stop, but seem content in making our lives miserable.


David Gauke (ex-Corporate Solicitor) who pushed through this cost-cutting project, got his reward, The Ministry Of (In)Justice, although the Constituents of Brent East didn’t elect him when he stood here as a Candidate, then he was given a safe Tory Seat. No Jobcentre interviews for him! Esther McVey (ex-Family Business Director)  the new DWP Secretary of State, was kicked out of her Wirral West Seat at the 2015 election, but was then given George Loadsa money Osborne’s safe Tory seat. No Jobcentre interview for her either! Guy Opperhan (ex-Barrister), (DWP) Parliamentary Under-Secretary lost TWO elections...Theresa May seems to love below-calibre losers! The new Minister of Employment is Alok Sharma (ex-Corporate Accountant)-these are not your common man, or woman, but Corporate Schmucks! No idea of jobcentres! All eager to also push thru disastrous Universal Credit!!"

P.Murry came to give the support of Brent Green Party and the Green Party Trade Union group and PCS (the Public and Commercial Services Union, which represents Jobcentre staff ) said "Appreciate groups like yours helping to ensure these job centres don’t just disappear from communities without any acknowledgement of their contribution and place."

KUWG are also protesting Tuesday 6th February 2018 2pm-2.30pm Outside DWP HQ Caxton House, 12 Tothill Street, SW1H 9NA   to ‘welcome’ Esther McVey as the new boss, with then a coffee-break and walk to the Ministry of (In)Justice, for 3pm-3.30pm, 102 Petty France, SW1H 9AJ to say “Hi” to ex-DWP boss David Gauke, Lest he forgets us (St James’ Park Tube Station is between them both & both near Westminster Tube)

As Green Party Trade Union Liaison Officer for Brent and for the London Federation of Green Parties, and as a council tax paying resident of the London Borough of Brent, I am very concerned to hear from Councillor Duffy’s email, that there are contamination problems arising from the dumping and disposal of asbestos contaminated soil in Paddington Old Cemetery.

As I am sure the CEO of Brent and the Brent Councillors dealing with this matter, are aware asbestos is relatively safe when undisturbed, but if it is caused to give off dust, which is harmful if inhaled, that dust can give rise to severe health problems which may not be apparent until years later.

I would therefore like assurances that the Council did not deliberately send asbestos contaminated waste to Paddington Old Cemetery, and that once Council became aware of the presence of such waste, it ensured that:

1.  all workers dealing with the waste were fully briefed as to its potentially hazardous nature and advised to inform their GPs of possible exposure.

2.  all workers dealing with the waste were fully equipped with appropriate protection

3.  measures were taken to ensure that the waste would affect members of the public visiting the Cemetery and the students and staff of the school which neighbours the Cemetery.

4.  the school and the NEU Health and Safety representative was notified of the presence of the waste and warned when it was likely to be disturbed.

Yours sincerely Peter Murry
Posted by DON'T dis US at 16:37 No comments:

The Village School in Kingsbury

As Green Party Trade Union Liaison Officer for Brent and for the London Federation of Green Parties, I am both pleased and sad to be sending support to the teachers at The Village School in Kingsbury for a second time.

I am pleased to convey the support of the Green Party to Trades unionists who oppose academisations, and because, as a UCU member, I have the greatest respect for the NEU members who are now taking strike action again to protect a public education service for the people of Brent which large amounts of council resources have been paid to develop.

I am saddened that the strike is now taking place because of the intransigence of the School Governors and their Chair, (who is also the Brent Labour Group whip), and the refusal of the Brent Labour Leader Muhammed Butt to clearly oppose academisation of the Village School; although it is becoming increasingly apparent that academisation is an expensive and unworkable policy which is of minimal benefit to education.

UCU The University and College Union
Posted by DON'T dis US at 22:23 No comments:

We're very pleased to announce that the Daily Mirror &  Sunday Mirror are the latest to come on board and officially back the emergency NHS demonstration next week. 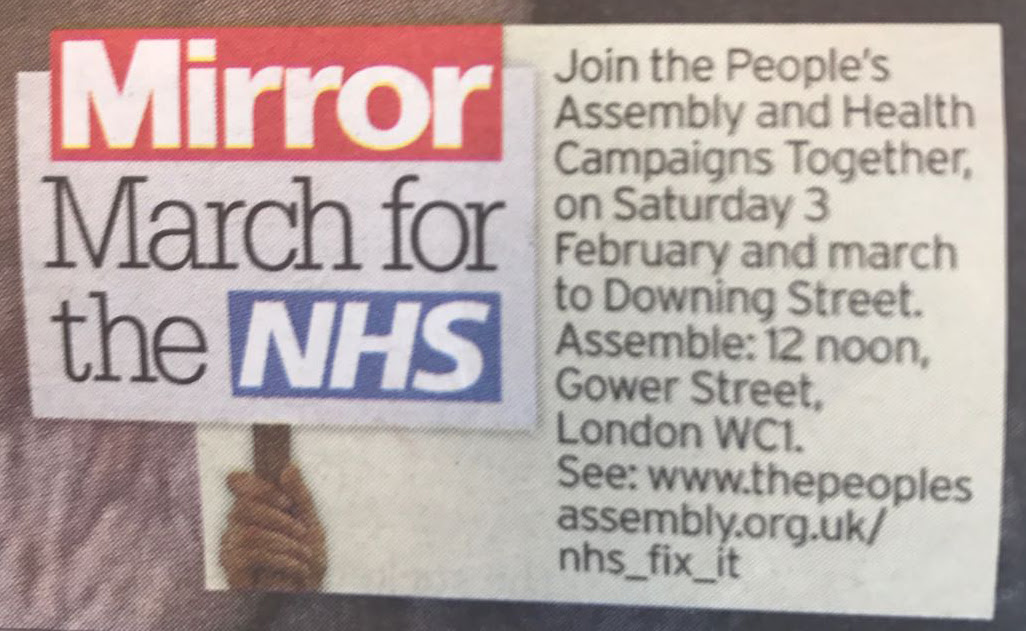 Tens of thousands will march for our NHS next Saturday in an emergency demonstration called by The People's Assembly & Health Campaigns Together. The demonstration will demand an end the winter crisis with a cash injection to restore the NHS budget and a commitment to increased funding each year.
Emergency Demonstration - NHS in Crisis: Fix it Now
Saturday 3 February, 12pm Gower Street London, March to Downing Street
Everyday from now until the demo they'll be running stories on why the NHS demonstration is so important including interviews from the front line, details of the route and speakers, quotes from organisers, union representatives, celebs and more.
Why are you marching?
We're asking for people to send in a short quote (under 100 words) about why they're marching and what the NHS means to them - we'll include a selection of quotes in the Mirror and use others on our website and on social media. Please also include a headshot of yourself in the email. Send these to: office@thepeoplesassembly.org.uk
How you can help:
Other exclusive stories and interviews will also be run in the Morning Star newspaper who have always backed our demonstrations, protests and been central to the anti-austerity movement. Keep an eye on their website and paper for details.
In case you missed it:
"Blood on their hands": NHS protesters shut down road outside Parliament targeting May, Hunt and Branson 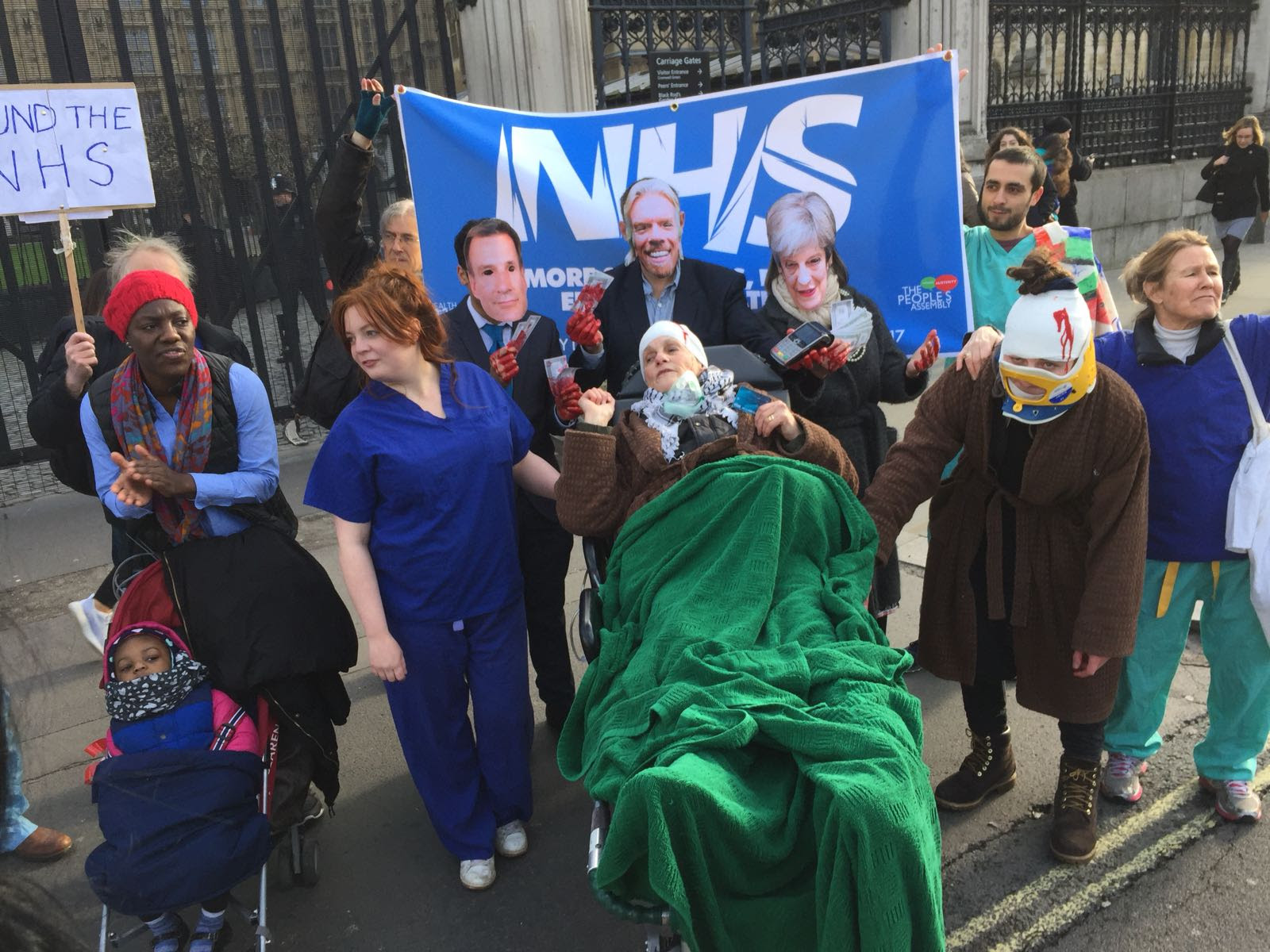 The People's Assembly Against Austerity
http://www.thepeoplesassembly.org.uk/
Posted by DON'T dis US at 18:24 No comments:

"At KUWG today we agreed to wear black as our farewell to Neasden Jobcentre Tues 30/1/18 1pm-2pm. [Non-KUWG members welcome"

Jenny Jones (Baroness Jones of Moulsecoom) the Green Party member of the House of Lords, has written to Brent Council supporting  the call for an independent investigation into the asbestos contamination in Paddington Cemetery LINK.

Cllr Duffy has written to me on behalf of a the Friends Of Paddington Cemetery (FPC), a local residents group. The group have concerns around the issue of the inappropriate use of asbestos contaminated soil to create additional burial sites in the Cemetery. Having read their concerns I am troubled by the lack of transparency being shown by the council and by the secretive way senior officers and leadership of the council are conducting themselves.

Can you tell me how the waste arrived on site and did the council knowingly deliver contaminated (with asbestos) waste to Paddington Cemetery in August 2015?

I am further troubled by the failure of your in-house audit team to interview any residents or member of the workforce who may have been exposed  to the asbestos. NHS guidelines say "While asbestos can be dangerous, it does not present a health risk if left undisturbed, but if material containing asbestos is damaged, it can release a fine dust that contains asbestos fibres. When the dust is breathed in, the asbestos fibres enter the lungs and can gradually damage them over time.”

The pictures provided by FPC  (above) clearly show a considerable amount of dust being raised by the workman on the mound after the asbestos was discovered. If the council allows those workmen to work on the mound without protective overalls and masks and training, it's a very serious matter that puts both the workmen and public at risk.

Posted by Martin Francis at 14:23 No comments:

'an ipad is no substitute'