The cost of motorists

Cllr Daniel Brown's assertion that Labour administered Brent Council's "attack" on Brent motorists is an absolute disgrace" is pure politicking. He continues in this vein with his judgement that to double the overall charge is "very unfair in these difficult times".

With the Government cuts aimed at the public sector, who does Cllr Brown feel will suffer most, people at the top end of society or the poorest?

Taxes are still going to need to be collected as even David Cameron hasn't walked away from Government completely, and these will have to largely come from people who are not at the bottom of the ladder. It is one hallmark of a civilised society that taxes are used in part to redistribute the wealth the country earns. The Council needs to get its income from somewhere to make up any short-fall in its expenditure obligations after the Government's rate support grant is taken into account.

The Lib Dems have, without doubt, signed up to the principle that the polluter pays: and that leads inevitably to the logic of those who pollute the most, pay the most. Would Lib Dem Cllr.Brown like to draw up a 'profit and loss' account between Brent motorists and those whodo not have a car or regular access to one? Would he like to begin by putting on one side of the accounts, the deaths, injuries, accidents, traffic congestion, air and noise pollution, contributions to climate change, police supervision and the eating-up of urban space and the character of our town centres?

I'll leave Cllr. Brown to list the benefits that Brent motorists bring to the rest of us after allowing for the various tax contributions they make to society's finances and having deducted the national monetary costs of providing the services which allow motorists to enjoy the benefits of their cars.
Posted by Martin Francis at 20:00 No comments: 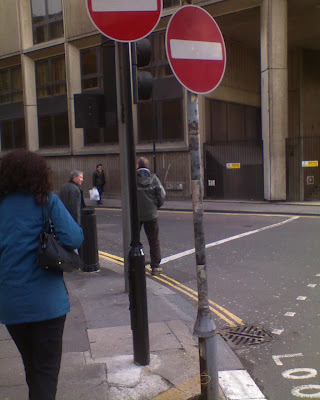 Unfortunately, Brent Council's voter registration renewal process has problems. I received my annual renewal notice a few weeks ago. You have the option to confirm or amend your registration details by freephone, text, internet or post, "quick and easy, 24 hours a day, 7 days a week". Or so advertised.

The freephone (0808 146 0115) was not ringing at the times I tried. After speaking to the always responsive electoral services, to check whether there was a typo on the form, I was advised that the number was correct as printed but "currently down".

Upon resorting to the on-line method http://www.online-register.co.uk/ I discovered a major flaw, which I have since reported. If you are confirming that all details are correct and there are no changes to make, you will then be prompted with the question whether any electors require a postal vote. If answering Yes to this question, you will next be asked which electors require it with a view to sending them a postal vote registration form. But for those electors who already have a postal vote and have confirmed their original details as correct, how should they answer the postal vote question?

If they answer No, then they run the risk of overwriting their original details - contrary to intention! However, if they answer Yes, simply answering the question literally, they will then generate a registration form "in November" that they'd already completed once before! It doesn't help to be presented with the option to change the line number and only the line number of the elector/s wishing to vote by post before finally confirming on-line - since there is no option to change the original answer to the postal vote question itself, with the benefit of hindsight (and assuming one has a direct line to electoral services while one is doing this).

Brent electoral services have told me registration forms generated in due course in such cases should be ignored as redundant (a bit like the misleading No Entry road signage pictured :).

The on-line instructions are clearly misleading and unsatisfactory. At best, they will result in wasted postal vote registration forms and postage. It's a mystery to me how the wording could have been drafted and approved as is, as a matter of semantics and logic. The follow-up question simply needed to say only answer Yes, if this is not already correct on the form. But probably all the steps, and their sequencing, need to be properly looked at again.