Author Saci Lloyd will visit the Willesden Green Library Centre on Saturday 9th April to read from her acclaimed teenage novels “The Carbon Diaries 2015” and “The Carbon Diaries 2017”. Following the readings there will be discussion with a teenage audience about the prospect of carbon rationing in the UK and feelings about the threat of Climate Change.

Saci Lloyd's first novel “The Carbon Diaries 2015” was shortlisted for the Costa Book Awards in 2008. Its heroine is Laura Brown, a teenager who struggles to cope with her family, dreams of a breakthrough with her punk band and fancies the boy next door. When on 1st January 2015, the UK is the first nation to introduce carbon dioxide rationing, Laura chronicles the events of this drastic bid to combat climate change and illustrates how carbon rationing is threatening to turn her family, her local environment and the whole country out of control. Praising reviews include:
 “This is a charming tale full of laughs and angst, with a message both accessible and relevant to today's teenagers.' -Bookseller's Choice, New Publishing
 'An uproarious, scathing and pathos-filled romp - Adrian Mole does the apocalypse.'
– Financial Times

In the sequel “The Carbon Diaries 2017” Laura tours Europe with her punk band and becomes involved with an increasingly dramatic sequence of climate change-related events that include drought in Europe and Africa, a tidal-wave of desperate immigrants, a water war in the Middle East and clashes between Londoners and the army in the town centre.

Ken Montague, Secretary of the Brent Campaign against Climate Change says, “After the failure of the Copenhagen Climate Summit and the limited outcome of the recent climate talks it is easy to forget that if we don’t act now climate change will be a far worse threat to our future than the economic crisis. It will be the generation of Laura Brown's children who will see the fight over natural resources. ”

The reading and discussion is from 2- 4pm on Saturday, 9th April 2011 at the Willesden Green Library Centre, 95 High Road, Willesden, NW10 2SF. All are welcome. Please bring your copy of the “Carbon Diaries” along if you would like it to be signed by the author.

Notes for Editors
1. Two photos of the author and book covers, attached.
2. See author's website www.sacilloyd.com and publisher's website with summary of content www.hodderchildrens.co.uk
3. The organiser of the “Green Writer” series is the Brent Campaign against Climate Change, the local group of the national Campaign against Climate Change . It is a non-profit making network and information exchange for participating environmental groups, trade union organisations, tenants’ and residents’ associations, and individual climate activists within the London Borough of Brent. For more information see http://www.brentcacc.com/ 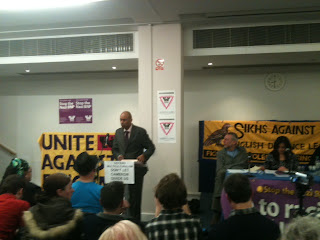 On 9 March 2011, I represented the Greens at the London Rally organised by UAF and One Society Many Cultures. The line up was as packed as the hall and I particularly enjoyed the slam poets. Please sign the UAF statement. Here's my speech:

Anybody here from the United Kingdom Independence Party? Thought not.

I want to talk briefly about solidarity and Failed State Fanaticism. I want to talk about how it is not “state multiculturalism” that fails us but leaders peddling racist stereotypes under the pretext of the politics of fear.

What exactly does Cameron know about “state multiculturalism”? In my own borough of Brent we enjoy the most ethnically diverse community in the country. I have neighbours from Poland, India, Italy, Russia, Lithuania, South Africa, Bulgaria, Somalia … the list goes on … and that’s just my street!

Across London some of the most hard working, yet disempowered workers, upon whom we rely for cleaning, catering, construction, transport, medical care, you name it, are not only struggling to make ends meet, but are having their life chances and those of their families squandered and diminished by the Coalition’s ill-conceived and aggressive cuts programme.

Geert Wilders should know. He and the far right do not wish to tolerate the veil. But WE do not tolerate the incarceration of 22 British citizens who received disproportionate sentences for public order offences during protests against the onslaught of Gaza.

Cameron should know. He would tolerate the draconian use of kettling by the police. But WE do not tolerate the Honouring of Cressida Dick for giving the order to shoot to kill an innocent Brazilian man on the London Underground simply for being in the wrong place at the wrong time.

Cameron would tolerate the EDL’s presence in Luton on the same day he lectures us on multiculturalism in Munich (ahem sorry Dave, but I think you mean München – don’t think you’ll be gaining admittance to my dinner table). But WE do not tolerate the rise in hate crimes experienced by the Muslim and Jewish communities of Europe when racism and xenophobia goes unchallenged.

Obama should know. He would tolerate the breaking of his own pledge to shut down Guantanamo within one year of coming to office. But WE do not tolerate the ongoing detention without trial or charge of over 170 men for over nine years. [Hold up 21 Feb 2011 stonewalling letter from FCO in reply to London Guantanamo Campaign for release of Shaker Aamer.]

Which ultimate Failed State Fanaticist said the following? “Sorry, but with these people, it doesn’t work. If you want to beat them, you need draconian powers that can be wielded administratively and with instant effect. Hence the antisocial behavior laws, DNA database, ‘proceeds of crime’ legislation, anti-terror laws and so on. Now you may decide that this is too high a price to pay, in terms of traditional liberties. Fine, but – and this is what I learned – it is the price. If you don’t pay it, you don’t get the result.”

[Hold up Blair's A Journey]

But this is the man who would tolerate the shaking of Gadaffi’s hand, not to mastermind peace, but to secure arms deals in an already unstable region.

WE are with Rosa Parks of 1955 Alabama and her refusal to give in to the racist request of a fellow passenger.

WE are with the peace-loving Muslims and will confront the Failed State Fanatacists of the wider world.

WE are for truth, justice, and social INCLUSION. 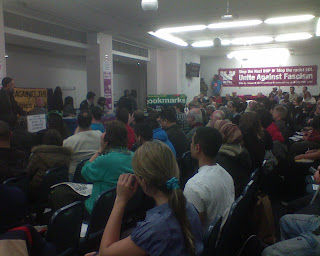 Photos by C Kiss and S Ali
Posted by Shahrar Ali at 10:49 No comments: 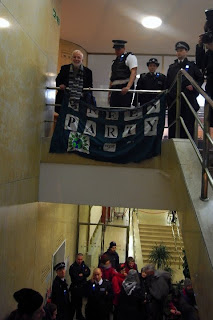 I was shocked and dismayed to learn that my political comrade, Martin Francis, and others, were prevented from attending a meeting of full Council on 28 February 2011.

By what authority may the Council exclude members of the public, nay, rate paying locals, from its proceedings? The Council recruited the police in its design under the pretext that admittance to the gallery was by ticket alone.

By what authority may the Council, exceptionally, institute ticketed entry? Who took this decision and why were seats left unoccupied?

Brent Council heaps injury upon its already injurious local cuts programme by this affront to the peaceable access to its Chamber by local residents. Or would the Council’s answer to criticisms of its impossible plan to spend £100m on a new civic centre, say, be to do away with the chamber altogether?

Transparency of decision-making and democratic accountability is non-negotiable, perhaps more especially when politically inconvenient for the Council. Brent’s misconduct must not go unchallenged or uncorrected.

Picture of Martin Francis prevented from entering the Chamber taken by Savva Papasavvas. More on Wembley Matters.
Posted by Shahrar Ali at 08:00 No comments: