Alan will fight for our local services in Kenton by-election


Brent Green Party has selected Alan Mathison to fight the Kenton by-election. Alan, now retired, has spent most of his working life in universities and housing management. He has been a governor of three schools. He stood for the Greens in Kenton in last year's local election and received substantial support.

"The Green Party is the only party nationally who are questioning the whole strategy of deficit reduction through cuts. Locally the Labour Party are implementing the cuts imposed by the Conservative-Liberal Democrat Coalition and failing to protect the most vulnerable in the process. We are opposed to these cuts and are actively supporting Brent Fightback's efforts at coordinating opposition across sectors and involving both trades unions and users of public services.

Nationally we favour increased taxation of the very rich and heavy taxes on bank profits and bonuses. We want investment in the creation of socially useful green jobs through the provision of training opportunities and projects that would provide insulation for all homes, low-cost sustainable housing and public transport, and renewable energy production. Translated into local action this would help provide jobs at a time of rapidly rising unemployment."

Alan is scathing about his opponents in the by-election:

"The Labour Party's assurance that it would protect the most vulnerable from cuts has proved hollow. The Brent Conservatives and Liberal Democrats have the colossal cheek to start campaigning against the cuts locally when it is their government that has demanded them.

All three parties voted for the £100m over the top Civic Centre vanity project which is a slap in the face for local people when they see their services being slashed and charges raised. If we want all our libraries kept open and this means not building the Civic Centre, well so be it. Let's not build it!"

Reflecting on Kenton, where he moved eleven years ago, Alan said:

"I enjoy living in Kenton, it is a great place to live, but looking around you can see that it has been neglected by Brent Council. If elected my priorities would be to tackle Kenton's flooding problems, find ways of relocating the John Billam children's playground to a safer and more accessible site, seek to end the traffic chaos on Drayton Avenue and put an end to the dangerous speeding on Woodcock Hill. Kenton would be a much safer and pleasanter place to live if these issues were tackled."
Posted by Martin Francis at 10:05 No comments: Links to this post

Posted by Martin Francis at 21:06 No comments: Links to this post

Join the Great Debate on Thursday 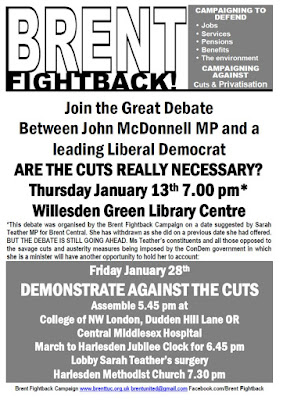 Brent Green Party have submitted the following to the Planning Inspectorate in response to Vodafone's appeal against Brent Council's decision to refuse permission for erection of a mast at the junction of West Hill and The Avenue, Wembley.

We oppose the application on the following grounds:

1. IMPACT ON LOCAL ENVIRONMENT - The mast and accompanying street furniture will be intrusive in an area of historical and landscape importance in the development of 'Metroland' and unlike the
masts at Salmon Street/Fryent Way, NW9 in the same area will be visible from local housing. They will make a detrimental impact on a well used recreational green space. We are also concerned about the impact of the magnetic field from the mast on this important local habitat
2. ENHANCING OPEN SPACES - We support Brent Council's policy of improving open spaces in terms of both amenity and biodiversity. The erection of a mast would be contrary to this policy.
2. ALTERNATIVES Vodafone appear to have made no effort to ascertain whether alternative sites with less impact are available.
Posted by Martin Francis at 16:15 No comments: Links to this post

Attached and pasted below is a list of the remaining meetings in Brent Council's consultation process on their proposals for closing half of the Borough's libraries. this evening's public meeting is especially important. There will be people there from the individual library campaigns. We have contact details for Cricklewood: Eric Pollock (Chairman of the Friends of Cricklewood Library) either by email on eric.pollock@tiscali.co.uk or by telephone on 020 8452 4072 and Kensal Rise: Phil O'Shea philoshea10@hotmail.com

The Save Kensal Rise Library facebook group is at:

http://www.facebook.com/#!/home.php?sk=group_132980853422017≈=1
There is a national campaign to defend libraries, the Campaign for the Book, supported by a number of authors, teachers, librarians and people who love books and appreciate libraries. It spreads news about campaigns and attached is a document suggesting co-ordinated action on February 5th.

Brent Fightback supports keeping ALL our libraries open. Once closed, they are gone for ever. We hope that, while pursuing their local campaigns, the libraries campaigners will unite and will become part of our broader campaign to defend jobs, services, pensions, benefits and the environment.

Consultation documents and a questionnaire are available on the website www.brent.gov.uk/consultation


Cllr Ann John, the Labour leader of Brent Council has announced that she and Cllr Mohammed Butt, the deputy leader will be attending the local area forums listed above to "discuss" the cuts in general as well as the proposals for the libaries. It is important that Brent Fightback has a good presence at these meetings and that we
Posted by DON'T dis US at 11:31 1 comment: Links to this post

Environmental Writers Project – Amended in Consultation with Brent Library Service. Speakers have agreed but dates need to be confirmed

This project involves a series of monthly readers’ meetings with environmental writers talking about their books, presented as a joint project by Brent Campaign against Climate Change and Brent Library Service. We would also hope to involve the Willesden Bookshop (not yet contacted).

The meetings will consist of a single writer giving a presentation of their book, possibly reading extracts, followed by Q&A and discussion. Anticipated numbers –
15 – 20. We would hope to give enough notice to enable readers to read the books before the meeting. The Library Service will publicise the series in advance.

“Books” may include pamphlets, reports or other documents, be fiction or non-fiction, and represent a range of political views and cultural backgrounds. Writers proposed for the first series of meetings from April 2011:

MONDAY 9 MAY 7.30pm – Andrew Simms – Ecological Debt: Global Warming and the Wealth of Nations (date to be confirmed)

MONDAY 4 JULY 7.30pm – Derek Wall – No Nonsense Guide to Green Politics
(date be confirmed)
MONDAY 1 AUGUST 7.30pm – Alexis Rowell – Communities, Councils and a Low Carbon Future (date to be confirmed).
Brent Libraries have agreed to jointly promote the meetings, hold them free of charge in the lending area of Willesden Green Library, make copies of the books available and arrange publicity in the Brent Magazine and other Brent channels.

If the first series is successful we would hope to organise further meetings.

Ken Montague
Secretary BCACC
kenmontague@msn.com
Posted by DON'T dis US at 17:47 No comments: Links to this post