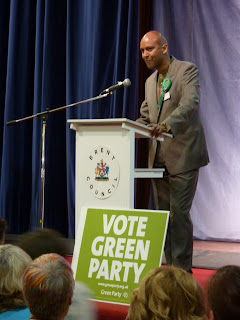 Shahrar Ali speaks at declaration for Brent Central on morning of Friday 7 May 2010 and televised in part (photo by Rob Dyke):

"I'd like to thank the 668 voters of Brent Central for putting their faith in me and the Green Party at this fiercely contested election. I also wish to thank my campaign team, and especially Alex for expriencing some of the sleep deprivation with me."

"Finally, Green voters, stick with us! We will be back for more. More Brighton Pavillions up and down the country alike . . . in the very near future. Because true politics requires nothing less!" 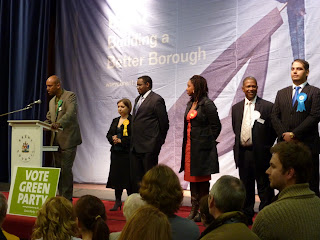 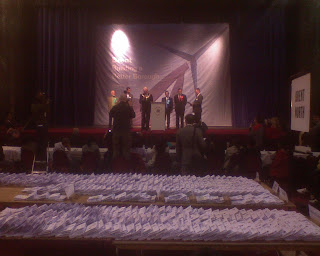 This picture shows the declaration for Brent North which took place just before Brent Central. Martin is standing on the left with thousands of ballot papers piled on the table in the foreground (photo by S Ali).

In the Council elections, the Greens stood maximum numbers in 20 wards and many of our candidates clocked up 300, 400, 500 or even 600+ votes in their wards. Labour made significant gains at the expense of both Lib Dems in the south and Tories in the north of the borough.

Notable acheivements in the borough elections include:

and in the north of the borough, in the wards of the parliamentary candidates:
Shahrar Ali (Welsh Harp): 430
Martin Francis (Barnhill): 421

Once it became known that the BNP were standing in Fryent, our candidates for that and neighbouring wards countersigned a statement and we put out an additional leaflet (coordinated by Martin) in order to beat them, too.

The formidable Council election counting operation was completed at around midnight on Friday, more than 24 hours after the ballot closed. The full General election and Council results for Brent are posted on the Council website here.

Shahrar and Martin were interviewed at the count by the Wembley Observer 'Brent election results now exepcted at 8am'. Other good press hits in Brent Times 'Battle for the Green Vote' on polling day and on eve of election 'War in Afghanistan still fires up public'. First thoughts and round-up from Martin. Some pictures and captions from the count by Rob Dyke.

Green results from around the country. Caroline Lucas our first Green Member of Parliament.
Posted by Shahrar Ali at 12:59 1 comment: Links to this post

the Rights of Mother Earth, Cochabamba, Bolivia, 20 - 22 April
Thousands of activists from around the world took part in the People’s World Conference on Climate Change called by President Evo Morales of Bolivia after the failure of the Copenhagen talks.  The conference brought together scientists, trade unionists, NGO’s and social movements to look for ways to build an alternative grassroots movement to protect the planet and fight for climate justice.
Mary Brodbin from Campaign Against Climate Change and Brent trade unionist Roger Cox took part and will report on what it achieved.
ALL WELCOME
Posted by DON'T dis US at 11:12 No comments: Links to this post

Last night's meeting about the closure of Kilburn College was crowded, angry and militant. Lecturers, students and local residents came together to denouce the closure plans and put forward ideas for active resistance. The main political party candidates for Hampstead and Kilburn spoke platitudes from the platform and soon disappeared.

Speaking from the floor, Peter Murry, an ex-lecturer at Kilburn and a council candidate for the Brent Kilburn ward spoke passionately of this attack on local people who face challenges such as learning English and getting into employment. He outlined how further education could transform their lives and said that the removal of their access to education was a crime. He supported calls for non-violent direct action and remarked that such tactics were a proud Green Party tradition. He called for further education colleges to be brought back under local authority control.

Bea Campbell, Green Party parliamentary candidate for Hampstead and Kilburn, spoke about how further education had improved her parents' life chances and suggested that another dimension to the campaign should be a legal route. She urged the campaign to seek legal assistance to use the recent Equalities legislation to show that the community had not been properly consulted on the proposals, (now a statutory requirement).

Students from the ethnic minority communites spoke movingly of their attachment to their local college and the difference it had made and was making in their lives. There were accounts of the shock they had felt when the announcement was made and their feelings of being completed disregarded by the college governors.

A large number of people, including Green Party members, volunteered to be part of a delegation to the college governors, to try and persuade then to reverse their decision.

http://blip.tv/file/get/Yrrumuk-brentfoehustingssummingup468.wmv
Summing up
Posted by DON'T dis US at 17:10 No comments: Links to this post 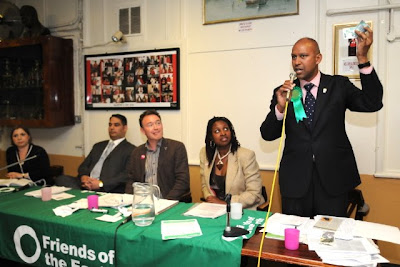