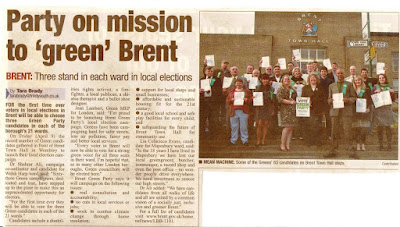 Wembley and Willesden Observer April 15th 2010
Posted by Martin Francis at 10:06 No comments: Links to this post

From Willesden and Brent Times April 22nd 2010
Posted by Martin Francis at 09:54 No comments: Links to this post

Friday 30 April 7.00pm, Kingsgate Community Centre, 107 Kingsgate Road, NW6 2JH - Public Meeting "Save Kilburn College". Not strictly a climate issue but it's important to make the connections. We need to safeguard our colleges if we are to create the infrastructure for a low carbon economy.

Saturday to Sunday 15 - 16 May - Climate Emergency Candlelit Procession and Overnight Vigil outside Parliament. Assemble 11.00pm outside St Martin's in the Fields, Trafalgar Square. Anyone interested in joining a Brent contingent should e-mail me at Brentcacc@gmail.com
Posted by DON'T dis US at 10:54 No comments: Links to this post

Shahrar Ali on the General Election

Posted by Martin Francis at 16:19 No comments: Links to this post

Up Up and Away for Brent and Barnet Green Parties 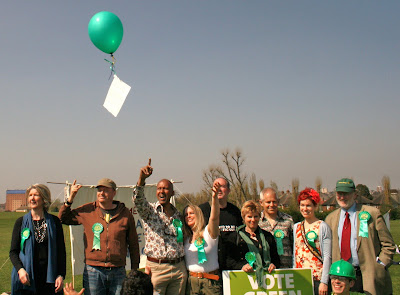 On Sunday 18 April, Green candidates were out in force at Clitterhouse playing fields near Brent Cross. Donald Lyven, parliamentary candidate for Finchley and Golders Green was attempting to fly a kite at 140m to bring attention to the height of a proposed chimney for a gasifying incinerator – even taller than the Wembley arch. He had to gain permission from the Civil Aviation Authority to attempt the stunt.

Shahrar said: “This was an imaginative idea well executed. The air was still and even at half its intended height, the kite display showed us just how obtrusive an incinerator chimney would be. The balloon release was inspiring. But instead of lifting the spirit the smoke would be oppressive."

The team released helium balloons with a message to finders – warning them that if the wind had blown the balloon in their direction, then they would also receive toxic emissions from the proposed chimney.

Brent and Barnet Greens are members of the Coalition for a Sustainable Brent Cross, and were joined by local Friends of the Earth groups. Coalition co-ordinator Lia Colacicco is also a Green candidate for Mapesbury.

Lia added a message for local residents: “People may be fooled into thinking that energy from waste is renewable. But after hearing the evidence from leading environmental chemist Paul Connett, I was shocked. The toxic nanoparticles produced by vapours in rubbish are so small they can’t be regulated, and can travel for miles. Rather than getting stuck in the lungs they pass through into the blood and are carried to the brain." 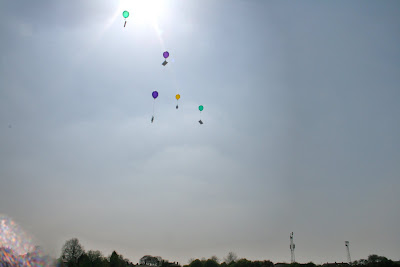 Local Press. Barnet Times.
Posted by Shahrar Ali at 01:38 No comments: Links to this post 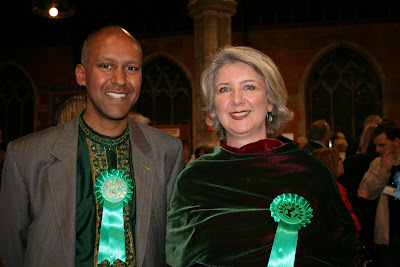 Shahrar Ali spoke last night at the Parliamentary hustings, attended by over 300 people. It was hosted by the Mapesbury Residents’ Association (MapRA) in St Gabriel’s church, which was unfortunately festooned in Lib Dem gold.

The evening began with a chance for Shahrar and Mapesbury council candidates Lia Colacicco (me), Tim Storer and Johnny Wharton to mingle with local residents and candidates for other parties.

The highlight of the evening for me was the man serving the wine asking the sitting MPs for a £2 donation then cheekily asking “would you like a receipt for that?”

After a very short AGM we were called up to sit on the stage. The speeches began with the 3 party leaders on Brent council – as we had no sitting councillor Shahrar had no voice but was allowed an extra minute on his parliamentary speech. I don’t think he missed much - the 3 speeches were a straightforward competition for who has lived in Brent the longest and who really REALLY loves Brent the most.

Actually, Shahrar was brilliant at making additional points during the Q&A and even managed to slip in two mentions for my campaign to improve the local High Street so that people don’t need to drive – it was certainly an issue that emerged spontaneously from the residents. On Brent matters he talked of our objection to civic centre was proud that we are standing a record number of candidates from all walks of life and backgrounds.

Shahrar was first to speak for the parliamentary election. He started by thanking MapRA for including us – unlike the BBC debate. He added a refreshing note of passion to the proceedings as he spoke of Green values, and:

People should vote green to progress for politics worthy of the name.

People were generally very warm and positive to Shahrar, Tim, Johnny and me. We ended the evening with a convert, who said he would vote for us because we were “the nicest people” – even though he had told me earlier that there was no way he could vote for a party which is against fly-fishing!

By Lia Colacicco
Candidate for Mapesbury, and Co-ordinator of the Coalition for a Sustainable Brent Cross
Photo of Shahrar Ali, parliamentary candidate for Brent Central with Lia Colaccico by Claudia Evans (click to enlarge)

Posted by Johnny Wharton at 23:31 No comments: Links to this post

The management of the College of N W London propose to save money by closing Kilburn College, slashing courses and dramatically reducing staff.

This closure will result in students being denied their right to further education in the area and their opportunity to improve their life chances.

Get involved, come along and have
your say at a…
Public Meeting

Candidates in local and general elections have been invited to the public meeting
Posted by DON'T dis US at 08:46 No comments: Links to this post 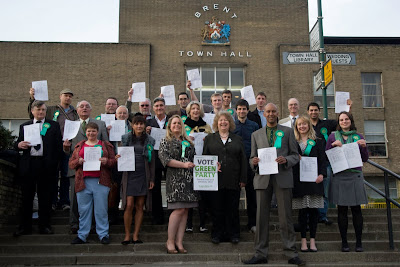 Candidates pictured each with a page of the official record of duly nominated candidates published by the Retuning Officer on 8 April 2010, one page confirming 3 Green candidates for each of the 21 wards (taken by Carmen Klammer, click image to enlarge).

On 6 May 2010, Brent Green Party is fielding a record number of candidates in the Local Election, an absolute full slate of 63.

Dr Shahrar Ali, campaign coordinator and candidate for Welsh Harp ward said: "63 Green campaigners dedicated and true have stepped up to the plate to make this an unprecedented opportunity for electors. For the first time ever, they will be able to vote for three Green candidates in each of the 21 wards."

Jean Lambert, Green MEP for London said: "I'm proud to be launching Brent Green Party's local election campaign. Greens have been campaigning hard for safer streets, less air pollution, fairer pay and better local services. Every voter in Brent will now be able to vote for a strong Green voice for all three seats in their ward. I'm hopeful that, as in many other London boroughs, Green councillors will be elected here."

Lia Colacicco Evans, candidate for Mapesbury ward said, “In the 18 years I have lived in Mapesbury we have lost our local greengrocer, butcher, ironmonger, a record shop and even the Post Office. No wonder people drive everywhere. We need investment to restore our high streets.”

Shahrar Ali continued, "We have candidates from all walks of life, from a disability rights activist, firefighter and a carbon reduction officer to a local publican, shiatsu therapist and a ballet shoe designer. We have candidates originally from Nigeria, Algeria, Sri Lanka, Bulgaria and elsewhere. All are united by a common vision of a socially just, inclusive and Greener Brent!"

2. Brent Green Party will be campaigning on the following action points:
- Real consultation and accountability.
- No cuts in local services or jobs.
- Work to combat climate change through home insulation.
- Support for local shops and small businesses.
- Affordable and sustainable housing fit for 21st century.
- A good local school and safe play facilities for every child.
- Safeguard the future of the Town Hall for community use.

3. Vital statistics. For the first time ever, electors will be able to vote for three Green Party candidates in each of the 21 wards, with the possibility of electing the maximum 63 Greens to Town Hall on 6 May 2010. In 19 wards, at least one of the candidates lives strictly within the ward boundaries. In 5 wards, all three candidates live within the ward. There is gender balance amongst Green candidates in each of 19 wards, the exceptions being Queens Park (3 women) and Preston (3 men).
Promoted by Brent Green Party on behalf of all 63 local election candidates, Brian Orr on behalf of Martin Francis and Jonathan Wharton on behalf of Shahrar Ali all at PO Box 54785, NW9 1FL.
Posted by Shahrar Ali at 21:50 1 comment: Links to this post

BCaCC was re launched at a meeting a Brent Trades hall (aka the Apollo Club) on 29 th march. It is a local group of the national Campaign Against Climate Change which is part of a wider international camapaign and exists to “exists to push for the urgent and radical action we need to prevent the catastrophic destabilisation of global climate.” (CCC website).

At the meeting a constitution for BCaCC was agreed which includes the following:
“BCaCC is a non-profit making network and information exchange for participating environmental groups, trade union organisations, tenants’ and residents’ associations, and individual climate activists within the London Borough of Brent.”

BCaCC will meet again on Tuesday 11 May, at 7.30 pm (venue to be confirmed). Interested individuals and organisations are invited to attend.

Future activities will include Meetings on a report back from Cochabamba (Bolivia) “Peoples and Social Movements Summit on Climate Change”, and Science versus Climate Scepticism, a website is also being set up. In the meantime BCaCC can be contacted at brentcacc@gmail.com the national campaign website is http://www.campaigncc.org/
Posted by DON'T dis US at 10:02 No comments: Links to this post

Caroline Lucas: Why You Should Vote Green on 6th May

Posted by Martin Francis at 15:18 No comments: Links to this post

Beneath the Mayor's Chuckling Veneer.....

Boris Johnson, the London Mayor, speaking at the London Planning Awards 2010 on March 29th, made light of the thousands of opponents of the environmentally disastrous Brent Cross Cricklewood Regeneration Plan.


This sound clip reveals that beneath the Mayor's chuckling veneer lurks a cavalier disregard for the views of Londoners and a reckless abandonment of any pretence of reaching an informed and balanced view of major development applications and their environmental impact. A public inquiry is essential.

Posted by Martin Francis at 17:37 No comments: Links to this post