News from another borough: Tory and UKIP Harrow paranoia?

I recently (25/3/2014), attended a hustings called by Harrow Civil Service Pensioners’ Alliance on behalf of the Green Party which will be standing candidates in the forthcoming local and euro elections. UKIP, Conservatives, Labour, and Independent Labour were also represented and all parties put forward their policies on various matters. I was not surprised, but perhaps a little disappointed, that I was the only one to mention climate change and its possible implications for all of us.

I was, however, surprised by the emphasis placed by the UKIP and Conservative representatives on the issue of ‘beds in sheds’ ’ i.e. people living in converted garages, garden sheds etc. which was claimed to be a major problem in Harrow. UKIP also claimed this problem was widespread elsewhere and therefore the country ,  overpopulation problems. Both UKIP and Conservative claimed to have evidence from heat seeking detectors in over flying aircraft.

There were questions from the audience about the current London housing price inflation and resulting crisis in accommodation which is probably causing some of the ‘beds in sheds’ phenomenon through such things as young people staying on in parental homes. There were also questions on such issues as the pressure on local health facilities and threats to Freedom Passes. Perhaps it is these basic matters that concern Harrow voters more than the slightly spooky concerns with surveillance of the population which seem to obsess some of the parties standing.


Peter Murry, Brent and Harrow Green Party representative.
Posted by DON'T dis US at 07:10 No comments:

Brent Stop the War meeting: Environmental Crisis and the links to War

FUTURE MEETING at RUMI’S CAVE 26 Willesden Lane, NW6 7ST
April Meeting Monday 14th April doors open 7.00 pm, meeting starts 7.30 pmsharp
We are very fortunate to be sharing this meeting with Disseminus who have invited
Dr Nafeez Ahmad to speak on Environmental Crisis and the links to War
A decade and a half into the 21st century, humanity faces a wide range of interconnected and overlapping crises - environmental, economic, energy, as well as concerning food, water, poverty, ideology, psychology, and culture. These crises are escalating. What is their link to war, violence and terrorism? This meeting will explore the range of potential scenarios for what a business-as-usual future holds for the human species and Planet Earth, the deep structural causes of our current predicament, and the opportunities for radical social transformation.
Dr. Nafeez Ahmed (www.nafeezahmed.com) is an investigative journalist, bestselling author and international security scholar. He writes for The Guardian go to http://www.theguardian.com/profile/nafeez-ahmed for a profile and a link to his Earth Insight blog on the geopolitics of environmental, energy and economic crises. He is executive director of the Institute for Policy Research & Development, and his latest book is A User's Guide to the Crisis of Civilization: And How to Save It, which inspired the documentary feature film, The Crisis of Civilization www.crisisofcivilization.com
Posted by DON'T dis US at 20:05 No comments:

London Mayor Boris Johnson is trying to persuade the Home Secretary, Theresa May, to allow water cannon on London’s streets. 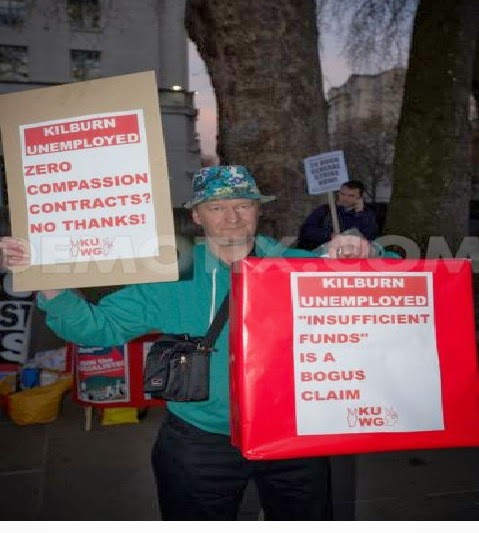 The photos I got a friend to take with my camera did not click properly tonight.

However, here is a clickable link to photo Peter a photographer from Demotix took of me tonight with newly decorated Kilburn Unemployed 'Budget Box'.

Demonstrate for a Peoples' Budget 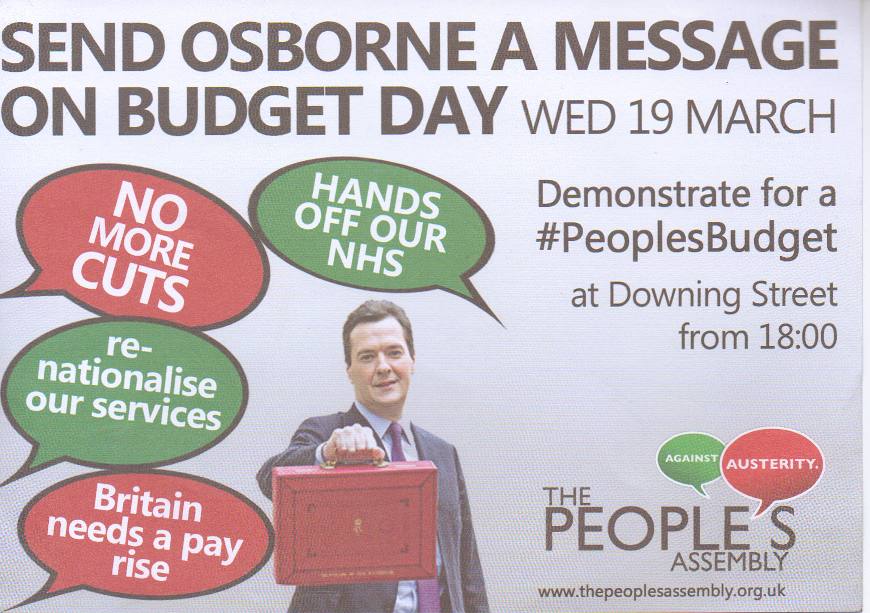 The beginnings of a structure to build a movement and the sense of shared purpose that can make it happen.

Saturday, 15 March 2014 from Wembley Matters Martin Francis' blogPeople's Assembly makes itself fit for purposeToday's recalled People's Assembly Against Austerity began with a warm minute of standing applause for Tony Benn and Bob Crow which seemed to set the tone for a serious but friendly day in which the organisation sorted out its aims, structure and priorties in an atmosphere refreshingly untainted by sectarianism.I could have been there wearing one of several different hats but settled for the Green Party Trade Union Group which had put forward a resolution committing the PAAA to campaign for effective action against climate change. Natalie Bennett's moving of the resolution linking austerity, neoliberalism and clinmate change was well received and the resolution was passed overwhemingly.The Assembly adopted the People's Charter for Change which states: We need a government to reverse damagaing austerity and replace it with a new set of policies providing us with a fair, sustainable and secure future. We can no longer tolerate politicians looking out for themselves and for the rich and powerul. Our political representatives must start governing in the interests of the majority in the direction outlined by this statement of aims.The aims were:1. A fairer economy for a fairer Britain2. More and better jobs3. High standard homes for all4. Protect and improve public servies5. For justice and fairness6. For a secure and sustainable futureSupplementary motions were passed adopting the People's Charter; supporting the nationalisation of those firms and banks that do not invest to build a high-skilled, high-wage, high employment economy; supporting house building, rent capping and opposing fixed term tenancies and 80% market rents in Council and Housing Association properties and supporting regulation of rents, conditions and tenancies in the private rented sector; stepping up campaigns to defend the NHS and abolish the NHS and Social Care Act, brnging privatised NHS services back under public ownership and control; and resolving to campaign for money to be spent on welfare rather than warfare,The structure that was agreed created a body to be known as 'The Assembly' which would manage the PAAA between conferences and would be made up of one representative from each signatory group and one representative for each local, national or group assembly and this will nominate a management group to be endorsed by the Assembly. The Assembly will meet at least twice a year. A supplementary motion from the Coalition of Resistance was approved which set out the People's Assembly's commitemnt to be a broad united campaign against austerity, cuts and proiatisation in workplaces, commity and welfare services based on general agreement on the signatories' Founding Statement. It was made clear that the PA would be linked to no political party and would be committed to open non-sectarian working. An amendment to adopt a less formal, decentralised structure with participatory democracy and consensus decision making, on the lines of Occupy, across the PAAA was defeated.Two slightly contradictory motions were passed on Finance with some confusion about what constituted membership and membership fees, and whether these should be paid centrally or locally. This will need sorting out in the near future.The Assembly adopted a future programme based on mobilising hundreds of thousands of people in activity and coordinating national events, days of action and support groups, It was agreed to work to set up new People's Assembly groups, strengthen local groups and central organisation (finance will be essential for this) to hold 'meetings, rallies, protests and actions in every locality possible' and to mobilise for the following national events:• March 19th Budget Day Demonstration• March 22nd Stand up to racism demo• March 26th Support for NUT strikes• April 5th Day of Action Against the Bedroom Tax• May Day Events• June 21st People's Assembly National Demonstration (support by the NUT)• August 31st NATO Protest Cardiff• September 28th Tory Party Conference protest• October 18th TUC National Demonstration The day ended with a rousing speech from Christine Blower, General Secretary of the NUT, making a strong case for community based campaigning in the form of the Stand Up For Education camaign that has seen NUT members out engaging with the public at high street and market places stalls throughout the country.There is clearly a massive amount to do but the day left me feeling that we now had the beginnings of a structure to build a movement and the sense of shared purpose that can make it happen.
Posted by DON'T dis US at 20:20 No comments:

The Green Party has sharply differentiated its education policy from that of the three main political parties in revisions adopted at its Spring Conference this weekend.

The neoliberal project is based on the premise of unlimited growth and unrestrained exploitation of the earth’s resources and sees society purely in terms of the market, competition, private acquisition and consumerism. This leads to the marketisation of education through the privatisation of schools, erosion of democratic accountability and the narrowing of the curriculum policed by testing and Ofsted.

Our rejection of this model enables us to put forward an education policy that is child-centred and provides everyone with the knowledge and skills to live a fulfilled life, restores local democratic accountability, teachers’ professional autonomy and children’s right to a childhood.

The revised policy that was approved with only two or three votes against commits the Green Party to:

·        Adopt an admissions policy that recognises every child and young person’s entitlement to access a fair, comprehensive and equal education system, regardless of their background

·        Embrace a diverse range of educational approaches within that system

Existing policy on the Curriculum which replaces the National Curriculum with a series of ‘Learning Entitlements remains unaltered.

We know that many despair of the current policies of Michael Gove and Tristram Hunt’s pale imitation and the great and reckless damage they are doing to the education system, teachers’ morale and children’s well being. We have clearly set out an alternative vision that replaces competition with cooperation, coercion with partnership, and fragmentation with cohesion.