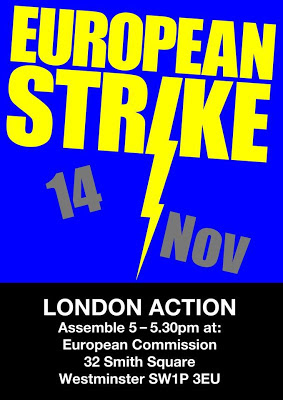 On November 14th there will be general strikes in Spain, Portugal, Greece, Cyprus and Malta. The ETUC [European Trade Union Confederation] is calling for solidarity action throughout Europe.


In London Coalition of Resistance is organising a protest at the European Commission. 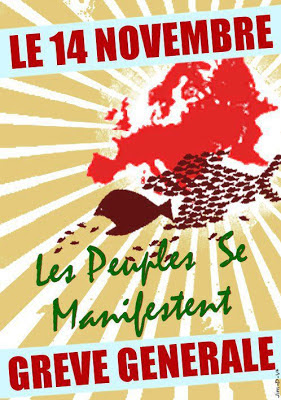 The next meeting of the steering group of Brent Campaign against Climate Change is open to anyone who wants to find out more about the current situation with global warming and our activities locally as a campaign group. Could I invite you to join us on 23rd October and ask you to pass on this e-mail to any of your friends and contacts, or members of your organisation, who might be interested in coming along.

Over the last few years the occurrence of droughts and floods in many parts of the world, including here in Britain, have pushed up food prices and posed even greater dangers for some of the world's poorest people. They suggest that man-made climate change is already something that affects us all, whatever our social background and cultural or religious beliefs. This situation will get worse unless we work together to press the people in power to take the necessary steps to reduce greenhouse gas emissions and dependence on fossil fuels as a matter of urgency.

Brent Campaign against Climate Change is the local group of the national Campaign against Climate Change. It works to raise public awareness on these issues and lobbies for practical measures to reduce greenhouse gas emissions. Our steering group is made up of representatives of different community and faith groups, trade unions and political parties, as well as concerned individuals. We want to increase its representation so that it reflects the whole of the Brent community and is able to operate even more effectively.

If you are able to come along to this meeting, the details are below and in the attached flier, which we hope you will display on notice boards. A map and directions are also attached. If you can't make it this time, please let me know if you'd like to receive further information. If you are member of community organisation, political party, faith group or trade union branch, we would be very happy to send along a speaker to one of your meetings. Please try to get us invited.

I hope to hear from you, or possibly see you on 23 October.

Thank you to everyone who has pledged their support for the production of our first tabloid  THE ECOSOCIALIST planned for distribution on OCT 20TH at the TUC march and rally.

We want our first paper to be attractive and well laid out !

We are nearly there (thanks to Doug for all his late nights) - but with more space it will look a lot better.

Give us your money - now !  (as they say). We have a lot of work to do and only so many hours left to complete this project !

If you prefer you can make your donations to Green left (please specify clearly that they are intended for THE ECOSOCIALIST planned for distribution on OCT 20TH.)
send a cheque, made to Green Left to: Peter Allen(GL Treasurer) , .
OR payments can be made directly into the GL bank account (details below):
acc name GREEN LEFT Co-operative bank,  , Delf House, Southway, SKELMERSDALE WN8 6WT sort code 089299 acc 65284751

PS A full financial report on “The Ecosocialist” will go to the next general meeting.

In Solidarity with SOAS Cleaners

﻿  ﻿A demonstration was held on the steps of SOAS on 4 October 2012, to express solidarity with the cleaners of SOAS and, in particular, with the plight of Lenin, an Ecuadorian who has recently been suspended following alleged failure to conform to work requests. Lenin and his supporters claim that unreasonable demands are being imposed upon him and other SOAS cleaners, in terms of being asked to do things for which they aren't officially contracted and to work extra hours on demand - "basically, they are being overworked", as one insider put it. Lenin faces a tribunal with his employer (SOAS contractor ISS) next week.

Posted by Shahrar Ali at 21:01 No comments: Links to this post