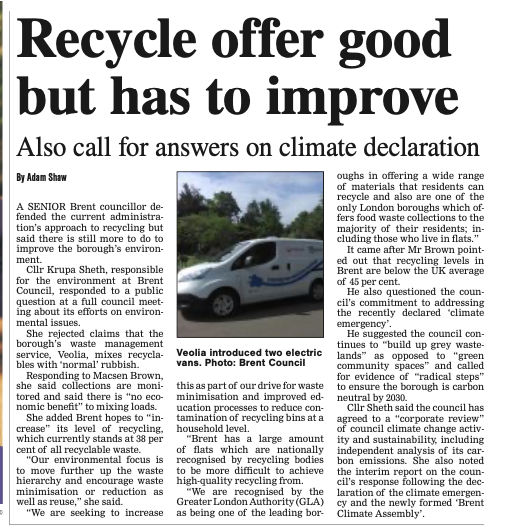 William Relton, Green Party  parliamentary candidate for Brent Central is calling on Brent Council to review two actions that were due to be implemented on Monday morning in the night of its Climate Emergency Declaration. William said,


Quite why this is happening so soon after The Climate Emergency Declaration was made is quite staggering.The Climate Emergency Declaration must be more than a public relations stunt. It will only have credibility if residents can see that it affects Brent Council’s every environmental action. I support Mapesbury residents concerned about the detrimental environmental impact of asphalt replacing paving in Dartmouth Road and the people of Furness Road who have managed to delay the cutting down of trees in their road, five of which are outside Furness Primary School. Both cases indicate that the Council is prevented by a bureaucratic interpretation of its own guidelines in making sensible decisions that contribute to   the fight against climate change.

I call on Brent Council to review both decisions and ensure that all such actions are seen through the lense of the Climate Emergency Declaration. Coincidentally I responded in the comments section of the CED specifically about Brent needing to implement a large scale tree planting programme, and this removal of healthy trees seems to be completely at odds with its own policy.

Posted by Martin Francis at 16:49 No comments:

Our General Election Manifesto - 'if not now, WHEN?'

Posted by Martin Francis at 16:19 No comments:

My name is William Relton. I am honoured and delighted to have been selected as the candidate for the Green Party in Brent Central. This really is the most important election for decades. The timing is not right for a proper General Election on the broader issues concerning most people up and down the country, which is how a General Election should work. This election will be forever remembered as the Brexit election. Just as Caroline Lucas has been campaigning ever since the ’16 referendum, we really should have had a proper People’s Choice referendum before this election. However, Parliament, or at least the two largest parties, has decided that we should have an election now, so here we are.

This will be a very important election for the smaller parties. People have really begun to realise that our two party, first past the post system, just doesn’t work anymore. A total reform of our electoral system is urgently needed. A vote for the smaller parties is a step in the right direction towards Proportional Representation, a system that the vast majority of modern democracies use. The Lib Dems are still badly tainted by their record in the coalition government with the Tories. A vote for the Green Party will help support a movement for a fairer, cleaner, happier Britain. Please do vote for me, William Relton, Green Party, Brent Central on December 12.