Banner to Save Kensal Rise Library 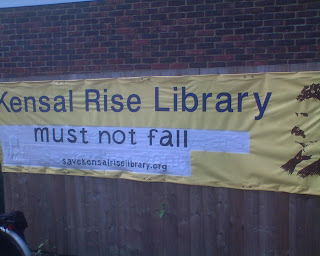 Wembley Observer series: "Library campaigners will fight on" (14 April)
Posted by Shahrar Ali at 14:38 No comments: Links to this post 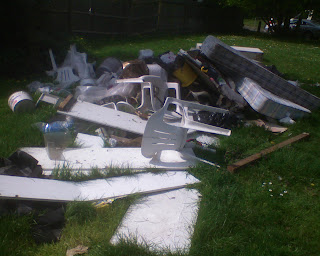 Unfortunately, this fly-tip is still where it was two weeks ago (new picture above taken 17 April). This is not to excuse the initial act of dumping, but why should it take the Council two weeks to finally promise to clear it? I have been advised that there was "confusion" about whether the internal responsibility lay with the StreetCare department or the Parks department. It has now been classified as a job for the Parks department, to be clerared by the end of the day.

More concerning is the admission of a manager I have had correspondence with at the Council regarding another ongoing request of mine to have an alleyway (public right of way, PROW26) which backs St Andrews Church cleaned up. He has requested assistance from the local Community Payback scheme because of "reduced funding". However, does this not risk endangering the rationale for the scheme - firstly that offenders were to be nominated for special projects by their local community, not to receive requests directly from the Council? Secondly, that the general upkeep of a public right of way is not a special project but an ordinary duty, that should be in the jurisdiction of our Council streetcare department.

Here is a quote from the Community Payback website on nominating projects:

"Local projects can be community based or for the good of a charity or charitable organisation. Street clean ups, graffiti removal, and even painting of derelict or run down buildings can benefit the community as a whole as well as specific regions or even individual buildings and residents. As a member of your local community you now have the power to nominate or vote for the project that you believe would gain the greatest benefit and offer the most to you and your neighbours and other community members."
Posted by Shahrar Ali at 13:42 No comments: Links to this post


Saci Lloyd questions and discussion 2
Posted by DON'T dis US at 10:28 No comments: Links to this post 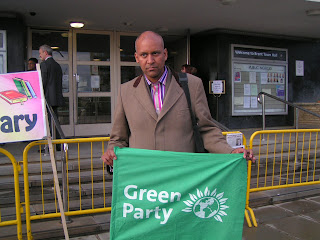 I was at the meeting at which Brent council steamrollered their plans to axe half the borough's libraries, despite eloquent representations against. Just one of the myths being peddled by the Council is that a saving of £1m over two years will somehow fill the funding gap made worse by its irresponsible decision to press ahead with a £100m civic centre which nobody wants or can afford. Brent is now giving us less for more.

Article in 12 April 2011 Evening Standard: 'Brent axes six libraries to save £1m'
Posted by Shahrar Ali at 18:21 No comments: Links to this post 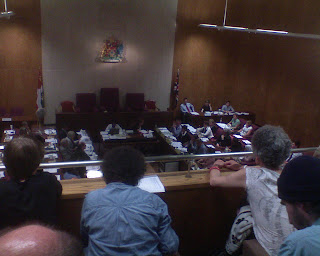 Last night, on 11 April 2011, the Brent Executive steamrollered their plans to axe half of the borough’s libraries (pictured from public gallery). This despite fierce opposition from residents both inside and outside the chamber who had been campaigning to save our libraries for months, first from the threat then from the promise of closure.

I was asked by a journalist on the way in what I thought would happen. The people of Brent will make their case, they will win every argument, they will contain their anger and seek a reversal of this reckless plan for the sake of some of the most vulnerable and deprived members of our community. Sadly, they will then be ignored. Unfortunately I was right on nearly every count. They did not all contain their anger. Everybody left feeling betrayed.

Leader Ann John facilitated the speaking rights of no less than sixteen (fact check) petitioners, all of whom were against the plans. We heard young, we heard old - invariably eloquent and impassioned - we heard from locals affected by plans to axe Kensal Rise, Neasden and Preston libraries, to name but three. A small number of councillors added their voices, but these rung hollow to most of those in the public gallery, perhaps with the notable exception of Cllr Harshadbhai Patel (Preston Conservative) – who sounded like he wasn’t just trying to cover his rear at the next election.

Public addresses went on for over two hours, with almost half an hour given over to a presentation of a “Libraries Transformation Project” – read Libraries Decimation Smokescreen – by Cllr James Powney, who was subjected to sustained heckling. Unfortunately, no right of reply was given to this presentation, which contained many bad assumptions and falacious arguments likely to stir even the most dispassionate observer. For example, we were asked to refer to maps in which population densities for young and old were given across the borough. These diagrams were used as a pretext to prioritise some libraries for closure ahead of others, on the assumption that less of the target groups would be adversely affected. But, by parity of reasoning, why not just provide us with a map of population density per se, and target lower density neighbourhoods – since that would be the combined effect?

Powney instead tried to cast himself as a champion of equalities! You starve communities of their local libraries, deprive some of the most vulnerable yet determined in our society from gaining access to a front line service – and you are really helping them in the end? Go figure. This kind of double speak was matched only by the timidity of other Executive members. Cllr Muhammed Butt asked a question about petitioners’ concerns about consultation and legality. We were then treated to stage-managed answers from officers which gave him the required result so he could vote with a clear conscience.

There are several candidates for what makes for the biggest sham of our Council. Is it that the "consultation document" was not a consultation document? – comparisons with the Camden consultation document entirely to the point. Is it that the 83% who opposed the closures, even on the document’s own terms, were ignored? Is it that Brent is building a £100m behemoth that nobody wants or can afford, and has the gall to pretend that this is a way of saving money and avoiding redundancies? As my FOI request showed, Brent’s own feasibility study proved that the project would cost more than the status quo for at least 25 years (see appendix here).

OR is it that the ten members of the Executive could not even bring themselves to raise their arms when it came to the actual decision-making? In fact it was so easy to miss the decision that clarification was sought from the Chair, who confirmed “unanimous”. What this moment betrays is the inability of the Exec to even stand up and be counted when it is their job to be counted, if nothing else. Not even this could be got right.

Petitioners came and went and were not even dignified with the material sign that their Exec members were going to ignore their pleas and appeals. No, this was diminished responsibility of a high order, an act of commission masquerading as an act of omission, as if their hands had been tied by unelected bureaucrats peddling legalese and experiments in social science. Powney at least had the chutzpah to speak what he believed.

Nay, the biggest sham is the absence of local democracy itself. For the people of Brent not only to be ignored but to be told that they have been listened to first. 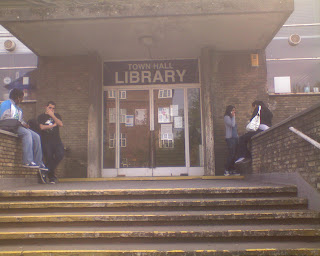 Brent Greens will be joining Brent Fightback and library campaigners in a lobby of Brent Council Executive on the steps of Town Hall tonight, Monday 11 April, 6pm onwards. The picture shows users of one of the borough's local libraries, at Town Hall itself before opening hours the same day. People are literally queuing up to use Brent's libraries - and will be asked to leave Town Hall library early to avoid unwanted "gate crashers" using it as an access to the meeting tonight. Desperate methods.
Posted by Shahrar Ali at 15:51 No comments: Links to this post 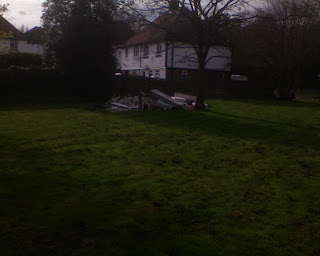 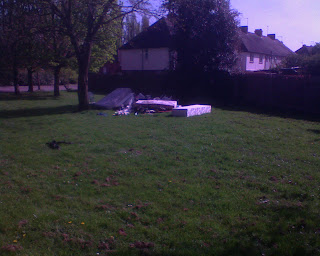 Above taken 10 April 2011. Spot the difference?
As the annual round of monthly council tax payments begin afresh in April, residents will be rightly concerned to see mountains of garbage in their neighbourhood not being dealt with. This is not to excuse the initial flytipper, but Brent has been made officially aware of this particular heap (at the junction of Birchen Grove and Old Church Lane) since 4 April. Reference 752069, complete with a picture I submitted on-line.
Posted by Shahrar Ali at 15:37 No comments: Links to this post