Public meeting against the cuts being organised by Brent Trades Union Council for next Wednesday July 28th 7.30 pm in Space2 at the Willesden Green Library Centre (map with directions also attached). The speakers are John McDonnell MP, Jerry Hicks from the UNITE union, Clara Osagiede from the RMT cleaners' campaign speaking on behalf of the Right to Work Campaign and Ann O'Neill from Brent Mencap. The chair will be Pete Firmin CWU, President of Brent Trades Union Council.
There will be plenty of time and opportunity for people to speak from the floor. The aim of the meeting is to build an ongoing united campaign against the Con Dem government's onslaught on working people's wages, conditions and jobs, on public services and pensions in order to pay for the crisis created by the bankers. BTUC sees it as vital to unite the public, private and voluntary sectors, service users with those who work to provide services, students, pensioners and unemployed. If we are divided and turn against each other, our resistance will be weakened. The proposed cuts and those still to come will greatly increase the inequality that blights this society and affect those already most vulnerable.
Please come to this meeting if you are able and please forward the details widely to everyone you know who will be affected by the cuts and could help build an effective campaign against them.
Yours in solidarity,
Sarah Cox on behalf of Brent Trades Union Council
Posted by DON'T dis US at 11:03 No comments: Links to this post

Taking note of Brent Notes instead of minutes? You couldn't make it up. 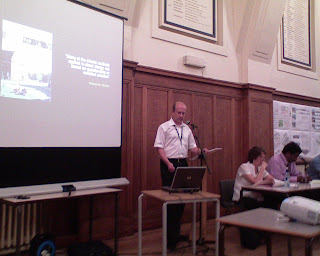 The first round of Brent Area Consultative Forums have begun since the new Council was elected. My local Kingsbury ACF took place on 21st July. The new chair, Cllr Kana Naheerathan (far right of picture, during presentation by transport officer) made a good impression by first moving that the minutes of the last meeting be approved. Ahem, did he say "minutes"?

Notwithstanding the prolonged difficulties faced by residents at this meeting to have material points accurately reported in the past, administrators of the forums have now decided that minutes will be called "notes" instead! Under insistence by local resident Robert Dunwell that the meeting be advised of the concealed reason for the change in nomenclature, Owen Thomson of the consultation team replied that "due to government cut-backs, and efficiency savings", it would be less expensive to take "notes" rather than "minutes".

But which came first, the presumed expense and inconvenience of correcting minutes that should have been accurate in the first place? Or the desire to find a pretext to avoid such embarrassment from occuring in future?

Six meetings, and twenty months after a fateful admission by the Civic Centre Project director in November 2008 that the Council hadn't consulted on the civic centre - and the mistaken follow-up notion that they didn't need to - the closest we have got to drawing a line under accuracy of minutes, sorry notes, is as follows:

"A concern regarding the accuracy of the recording of the discussion on the new civic centre, which had taken place at the Forum meeting held on 5th November 2008, was again raised and another request to amend the notes was made. In response to this request, Christine Collins explained the constitutional arrangements of the Area Forums. Following this, she stated that whilst the notes of the meeting, which were being disputed, would not be amended, the concerns of those present regarding this issue had been noted." [Minutes/Notes of 2 Feb 2010]

Translation of this Note into accurate Minute: whilst the notes [sic. minutes] of the meeting, which were being disputed [sic. challenged both inside and outside the meeting], would not be amended [sic. corrected], the concerns of those present regarding this issue had been noted [sic. ignored].

The consequences of pursuing an ill-conceived civic centre are warned against in my letter in the Wembley Observer. (15 July 2010)

The consequences of pursuing a strategy of systematically falsifying minutes, and lowering the expectation that accuracy is required in the first place, is to sabotage local democracy by concealing truth.

Accurate minutes cannot be "too expensive". They are indispensible in exposing the true cost of bad decision-making, when it occurs, and in allowing us to scrutinise politicians.
Posted by Shahrar Ali at 23:14 No comments: Links to this post

Next stop: No Trains. Therefore No Cattle Truck syndrome 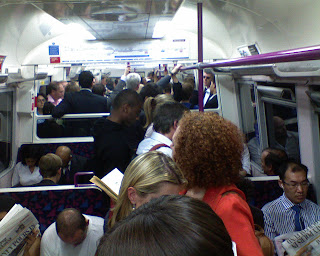 Commuters on the Metropolitan line have been suffering more than their fair share of signal failures and industrial action of late. This is the scene in the early evening rush hour on 21st July, far worse than even a badly-timed Wembley Stadium event could precipitate.

The "good" news is that none of this will be possible at the weekend – for the simple reason that Brentonians will have to endure yet another weekend of no Met or Jube line trains at all, in either direction.

Repeat after me: Planned Engineering works.
Posted by Shahrar Ali at 23:10 No comments: Links to this post 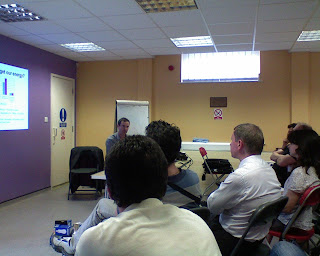 On 20 July, residents of Queens Park, Westminster side met for presentations and discussion about the insecurity of energy supply, renewable energy alternatives, energy efficiency in the home, and sustainable construction and design initiatives in the precinct. All manner of props and gadgets were laid out to illustrate a proposed energy gain. Questions were put, including the importance of factoring in the embodied energy, or CO2 equivalent contribution, involved in the manufacture of things designed to overall reduce our carbon footprints; not add to them.

Our own Susanna Rustin (far right of picture), of West Central Green Party, gave a neat overview of how to make tangible energy savings through simple steps.

Event programme.
Posted by Shahrar Ali at 23:02 No comments: Links to this post 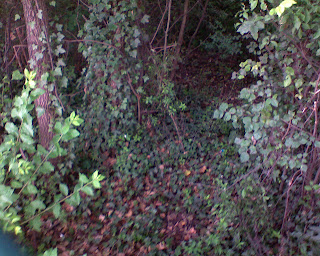 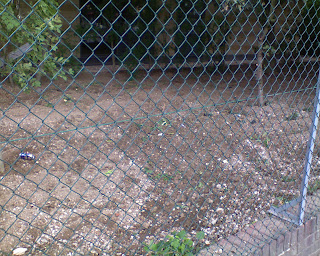 The building of a new Academy on the former playing fields of Bridge Road is not allowed to encroach upon a woody expanse to one corner, officially designated an SINC (site of importance for Nature conservation). However, it is not clear that this planning condition is being adequately respected. The pictures show adjacent stretches of woody area, with vegetation undisturbed in the first case but breached in the other.

Whilst the majority of trees on the protected area have not been felled as such, at least one tree has been damaged, if not destroyed, and a significant exapnse of undergrowth covered over with new soil. This new substrate has compromised the vegetation and flora that once existed as an essential part of the natural habitat of the woody area.

Protection of this space formed an integral part of Brent Greens' planning objection and is recognised in the planning consent itself.

Martin Francis, Children, Schools & Families Spokesperson, lead author of our planning objection, confirms: "Some of the trees are the remains of Repton's landscaping of Wembley Park, it was thought important as a site for breeding birds and a possible bat habitat. We were assured that it would be preserved and not disrupted." 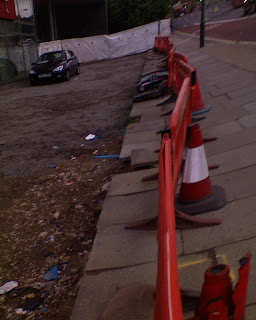 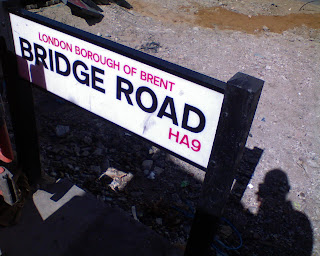 I have already reported on the intrusion of temporary hoardings onto the pavement. Some of this hoarding has been taken away in order to facilitate rendering of the paving fronting the building itself. However, again, there should be no encroachment onto the pedestrian right of way when this work is completed.
Posted by Shahrar Ali at 22:49 No comments: Links to this post

Environmental groups across Brent angered at Brent Council’s decision to cut key Environment posts will be holding a protest outside Brent Town Hall in on Monday 12th July. They have requested speaking rights at the Council Executive meeting to voice their concerns.

Brent Campaign against Climate Change[1] made up of environmental, trade union, political and community groups across the Borough are infuriated that Brent Council have cut two posts in Environment and Culture, including a new Climate Change Officer post. The campaigners believe the post, which would have would oversee and deliver the Borough’s Climate Change strategy, should be exempt from the cuts which will otherwise seriously impede the Council’s work to deliver a sustainable agenda.

Brent’s Climate Change strategy [2] was launched at an event in Wembley in December last year. A strategy steering group was due to be set up comprising public services, businesses, voluntary sector and community group representatives, but this new post was the only paid one on the committee. The other places are entirely voluntary, non-expert and do not carry any authority. The steering group is yet to be set up and the officer post, due to be recruited last year, was put on hold due to a recruitment freeze across the Council this Spring, and has now been axed. This work is instead being designated to existing staff, which campaigners believe will compromise what can be achieved.

Ken Montague, Chair of Brent Campaign against Climate Change says, “Brent Council really need to get their heads round the seriousness and urgency of the problem facing us. Climate change is happening now and it won't wait till they've balanced their budgets. This is a short sighted decision which shows that Brent is not planning for the future."

Steffi Gray, of Brent Friends of the Earth (FoE), who is hoping to address the Council meeting says, “This is outrageous. Brent have spent forty thousand pounds of our council tax hiring consultants to come up with this strategy, but have now pulled the plug on any further money to actually deliver the scheme. What’s more they have made a big deal of signing up to the 10:10 campaign [3] to reduce emissions by 10% in 2010, but this target is actually LESS than the amount they agreed to previously[4]."

“We want Brent Council to get serious about climate change, but we fear these cuts will put a sustainable agenda at risk. Given the urgency of climate change, this post should be a priority and be made exempt from the cuts.”

Shahrar Ali, Brent Green party spokesperson for planning and environment said, “We need to take urgent action on climate change mitigation locally. The Brent climate change strategy called for a full-time officer to work with other agencies and the public - today, not the day after tomorrow. Failure to recruit the post is environmentally irresponsible. We are calling for all newly elected councillors to see sense, for the sake of current and future generations."

Brent Council faces two hundred staff cuts in September, whilst Council tax has been frozen for the coming year. The decision to cut the posts was made without consultation with community groups who had previously been involved in shaping the Borough’s climate change strategy [5].

1. Brent Campaign against Climate Change is a non-profit making network and information exchange for participating environmental groups, trade union organisations, tenants’ and residents’ associations, and individual climate activists within the London Borough of Brent. It is the local group of the national Campaign against Climate Change. For more information see http://www.brentcacc.com/

2. Brent’s Climate Change strategy can be seen at http://www.brent.gov.uk/directorate.nsf/Climate%20change/LBB-12

5. A Council staffing and structure review was agreed in March 2010, but internal consultation to review this ended on July 2nd. Groups including Brent FoE and Brent Green party were consulted in the strategy development.