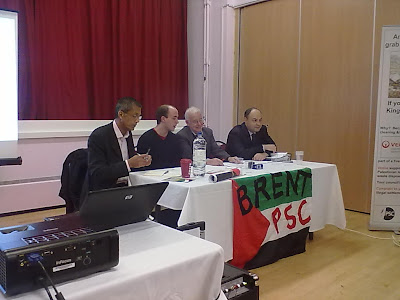 On the evening of 22 November 2011, I attended an excellent public meeting in Willesden Green Library centre organised by the Brent and Harrow Palestine Solidarity Campaign. Michael Deas, Europe coordinator BDS national committee (pictured above, second from left) spoke first about the reasons for the strength of the boycott against Veolia nationally and internationally and key successes in some local boroughs already, notably Tower Hamlets. He outlined three key areas in which Veolia was complicit in the Israeli policy of illegal settlements in the Occupied Territories of Palestine - the construction and operation of a light railway transport system connecting West Jerusalem to illegal settlements; the disposal and dumping of toxic waste on Palestinian land; and the operation of bus routes along trunk roads to the exclusion of Palestinians (all illustrated below in poster). 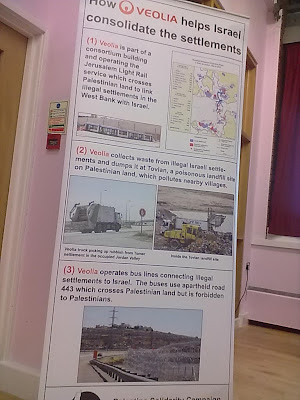 Simon Natas, a leading human rights lawyer (pictured right), spoke next about the relationship between international human rights law, in particular, Israel's violations, and the moral basis for our intuitions about legal transgressions. He also identified legally analogous precedents, such as the concept of "aiding and abetting". In the discussion period, I put it to him that there was good moral basis for confronting companies whose actions actively facilitated the oppression of human beings, and violation of their basic rights, in spite of the fact that they were not primary authors of the policies they were acting under: "co-responsibility not diminished responsibility". Mr Natas agreed that Veolia should be held to account, particularly when they had made commitments to protect human rights under corportate social reponsibility (CSR) codes of conduct.

Finally, Salim Alam, a BDS campaigner from Ealing (pictured left, substituting for Rafeef Ziadah), spoke about how the aims of the boycott could be furthered by local residents writing to their local councillors and impressing upon other officials the need to get the West London Waste Authority (which includes Brent as one of six boroughs) to exclude Veolia from consideration for municipal waste contracts on grounds of "grave misconduct". The campaign had already met with the Authority to press its demands, armed with a letter countersigned by 576 residents of the catchment area already (example of the sample letter).

The meeting was diligently chaired by Martin Francis and everybody got a chance to ask questions and network after the meeting on a campaign of great importance to anybody determined to see an end to the injustice and indignity suffered by the Palestinian people. The speakers were dedicated to their cause and this showed in their words, their summary of past actions and declaration of future intentions.
Posted by Shahrar Ali at 21:24