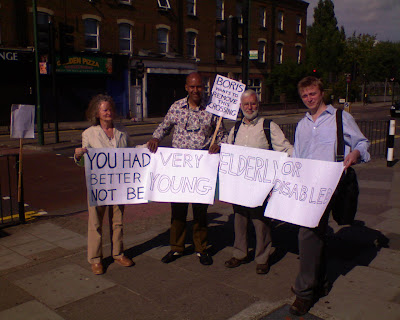 BRENT PEDESTRIAN CROSSINGS AT RISK OF REMOVAL
Picture: Jenny Jones AM, Shahrar Ali, Martin Francis and Tim Storer holding placards "You had Better Not be Very Young, Elderly or Disabled" and "Boris Wants to Remove this Crossing".

On 3 August, Brent Greens were joined by Jenny Jones, Green London Assembly member, to protest against the potential removal of vital crossings in the borough of Brent.

Brent Greens are investigating a list of seven pedestrian crossings in Brent listed by Transport for London as under threat of removal. The list, entitled “Signals Identified for Potential Removal” has been produced by TfL in conjunction with the Mayor of London as part of a review of traffic lights and crossings.

Shahrar Ali, Brent Green Party spokesperson for planning and environment, said: “We have just come out of another weekend of tube lines in Brent grinding to a halt. To add to the misery of public transport users, the Mayor of London is now considering removing vital pedestrian crossings. We will campaign vigorously against any such attempt to endanger the rights of pedestrians. We have contacted Brent council to establish their position on these necessary signals.”

Jenny Jones, Green London Assembly Member, said: “Crossings like this one are important for the business and social life of a community and removing it will reduce safety and convenience for local residents. People need to cross roads and not being able to stop the traffic briefly to cross safely, means less quality of life. The Mayor of London has got this wrong and needs to rethink.”

1. Brent Greens contacted Transport for London on 2 August 2010 to confirm that the list of threatened pedestrian crossings is still under consideration. The crossing at Neasden Lane at the junction with Braemar Avenue (shown above and here) is controlled by TfL signal reference 28/000190 and also affects the crossing at the Quainton Street junction. We have written to the Council transportation unit to establish their position.

2. The Mayor’s own website boasts “fewer traffic lights” as one of its visions. See “A vision for improving London’s transport”.

Jenny Jones: Are you open minded on keeping any, or all, of the traffic lights at the 145 sites which you have identified if local people so desire?

Boris Johnson: Yes. There may well be local circumstances of which TfL is not aware that may justify the continued presence of the traffic signals, although alternatives to signals will still be examined wherever possible. Boroughs will also be invited to nominate alternative and/or additional signals sites that they would like considered for removal.

5. In a press release issued by TfL on 1 July 2010, the Mayor’s transport adviser confirms that the project is led by a desire to smooth traffic flow.

6. Section 3.11 of GLA report “Subject: Appointment of a Rapporteur to Make it Easier and Safer to Walk in London”, 20 July 2010, also identifies 145 crossings for potential removal.
Posted by Shahrar Ali at 09:30